Fractures of the capitate bone are rare injuries, usually occurring in association with other carpal lesions. This case report aims to bring awareness to the diagnosis of capitate fractures and intracarpal ligament lesions and to provide details of the surgical fixation method and functional outcome.

A 32-year-old patient was observed during medical consultation, presenting wrist pain with functional impairment. The patient mentioned a fall five months previously. Imaging exams showed fracture nonunion of the capitate, apparently isolated. Wrist arthroscopy preceded the capitate fixation, being diagnosed with a rupture of the lunotriquetral ligament and of the volar portion of the scapholunate ligament, not perceptible on the imaging exams done. The patient was submitted to open reduction, internal fixation of the capitate with bone grafting, and lunotriquetral temporary fixation.

No complications were verified after surgery. Dorsal splint and Kirschner wires were removed six weeks postoperatively. The patient’s symptoms were resolved at three months postoperatively, and the computer tomography showed signs of fracture healing. In addition, the patient reported a high degree of satisfaction and excellent functional result.

Future work should focus on diagnosis at initial presentation to avoid delay in diagnosis and treatment. Internal fixation with autogenous bone grafting plays a role in managing capitate nonunion with good functional results. Wrist arthroscopy can be necessary for interosseous ligament injury diagnosis and should be associated with the main procedure.

Fractures of the capitate bone are rare injuries that comprise 1.3% of all carpal fractures, usually occurring in association with other carpal lesions [1]. Although they can occur from a direct axial load down the third metacarpal base, they most commonly occur from a fall onto a dorsiflexed wrist in ulnar deviation [2]. However, it can also be caused by a fall onto a flexed wrist where the radius directly impacts the scaphoid or capitate, resulting in transverse fracture of the two bones scapho-capitate syndrome [2].

Symptoms can be nonspecific, and radiographs can be difficult to interpret, leading to a delay in diagnosis and treatment of capitate fractures that can lead to complications such as nonunion, avascular necrosis, or post-traumatic arthritis.

This report aims to bring attention to capitate fractures and the ligament lesions associated with them, convey the importance of wrist arthroscopy in diagnosing carpal ligament injuries, and provide details of the surgical fixation method and functional outcome after nonunion of capitate fracture.

At medical consultation, a 32-year-old right-handed man was observed for persistent right wrist pain with functional impairment. He reported falling onto his outstretched right hand five months before; his radiographs were read as negative, and a wrist sprain was diagnosed and managed conservatively. Dorsal point tenderness over the capitate was observed on examination, with diffuse pain associated with an active range of motion with minimal restriction. Watson’s test was negative. Hand radiography (anteroposterior and lateral) (Figure 1) revealed a transverse fracture and cystic changes in the mid-portion of the capitate, with no signs of scapholunate ligament lesion. The computer tomography characterized the transverse fracture with sclerotic and irregular margins, subcortical cyst fitting with nonunion of the capitate, and no signs of widening of the scapholunate space (Figure 2). An additional magnetic resonance imaging scan was performed with a diffuse edema pattern throughout the capitate without ischemia, and no ligament disruption was observed (Figure 3). 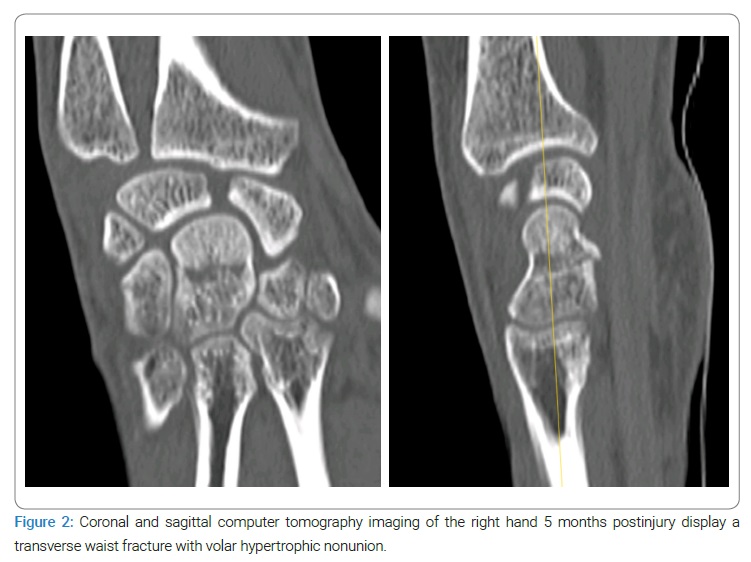 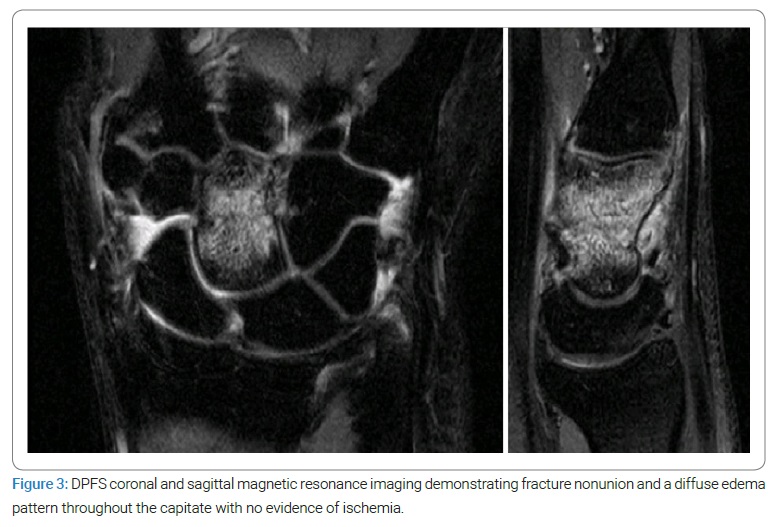 Surgical fixation was proposed considering the nonunion and the presence of subcortical cysts. The surgery procedure started with wrist arthroscopy, where we could observe a complete rupture of the lunotriquetral ligament (Figure 4A) and rupture of the volar portion of the scapholunate ligament (Figure 4B). A dorsal approach between the second and fourth compartment was applied (Figure 4C), and the nonunion focus was exposed. The fibrous tissue was debrided (Figure 4D), and bone grafting previously harvested from the distal radius was packed. The guidewires were inserted through the proximal pole of the capitate with the wrist in maximum flexion and reduced distal capitate, followed by internal fixation with two compression screws (HSC 2.0 screw). We proceeded with lunotriquetral fixation with two Kirshner wires. Radiographs were taken to assess fracture reduction, screw placement, and lunotriquetral fixation (Figure 4E). The wrist was immobilized in a dorsal forearm splint for six weeks, followed by wire removal and progressive mobilization. No complications were verified after surgery. 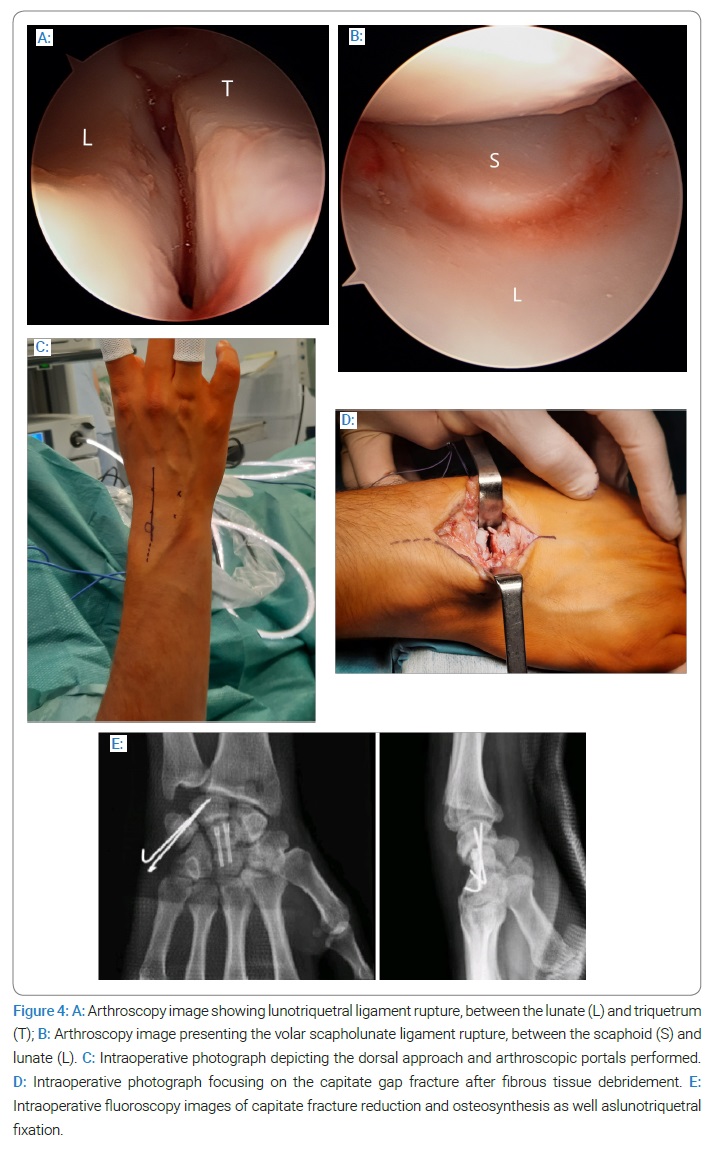 The patient’s symptoms were solved at three months postoperatively, and the X-ray imaging showed signs of bone graft incorporation and fractured healing (Figure 5). 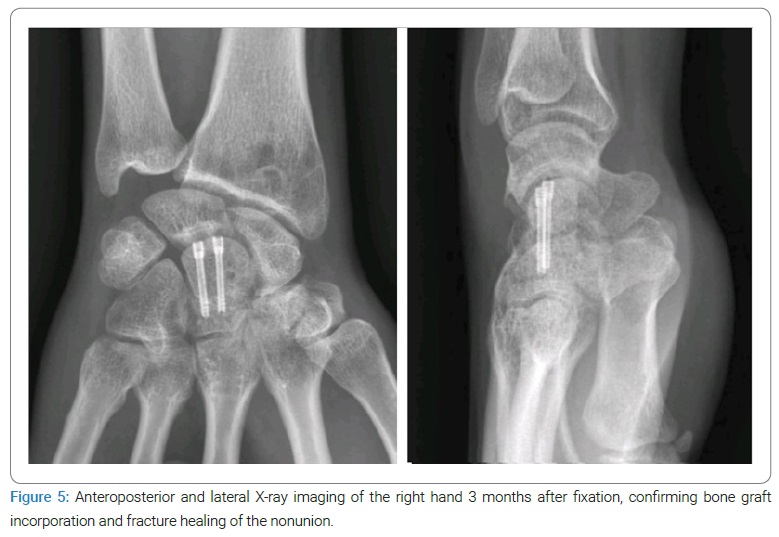 In addition, the patient was satisfied with the functional recovery obtained, returning to his job without limitation (Figure 6).

This report brings attention to capitate fractures and the carpal lesions that can be associated with them. Despite its rarity, attributed to its central anatomic location and strong ligament attachments protecting it from injuries, these fractures can cause significant morbidity due to missed diagnosis and frequent association with ligamentous disruption or other carpal bone fractures.

Scaphocapitate syndrome is a differential diagnosis often associated with other radial or ulnar wrist lesions not always detectable on X-rays, such as the rupture of scaphotrapezoid ligament lunotriquetral ligament, or fracture of trapezium, trapezoid, triquetrum or hamate [4]. The type of injury depends on the direction of the force and the severity of the injury, which determines how the three columns of the wrist are interconnected.

Pan et al. [2] stated nonunion to be the most substantial and underrecognized complication, occurring in 19% to 56% of isolated capitate fractures. Possible explanations for the high nonunion rate may include delay in diagnosis/treatment [5] and the poor blood supply at the fracture site. Capitate fracture is rare and frequently not evident in the initial X-ray, being necessary a high degree of suspicion in the presence of persistent, localized tenderness over the capitate. Therefore, computer tomography and magnetic resonance imaging should be requested to establish the diagnosis. Moreover, the capitate vascularization is supplied through a single intraosseous vessel, from distal to proximal, and the poor distal revascularization can lead to a delay in fracture healing [6].

Currently, there is no standardized treatment for capitate fracture nonunion [7]. In this case, internal fixation with autogenous bone grafting offered advantages compared to cast immobilization after considering the risk for nonunion and avascular necrosis and functional demands. In addition, cortico-cancellous interposition bone grafts may help reestablish the carpal height of the capitate, preventing carpal collapse and overloading to the scaphotrapezial-trapezoidal and triquetral-hamate joints. Jethanandani [7] proposed using a retrograde screw to preserve midcarpal articular cartilage and avoid the risk of posttraumatic arthritis.

Andersson [8] corroborates wrist arthroscopy as the gold standard for diagnosing carpal ligament injuries. Although magnetic resonance imaging is highly specific for scapholunate and lunotriquetral ligament injuries, its sensitivity is remarkably low. It does not exclude scapholunate injuries, nor does it characterize the interosseous ligaments’ tissue quality. As a result, magnetic resonance cannot be used to estimate the prognosis, capacity for healing, and the surgery that should be recommended [8]. Arthroscopy was settled to be the gold standard, being able to evaluate injuries dynamically, together with the degree of partial injuries and providing a tool for therapeutic intervention [8].

Future work should focus on diagnosis through physical examination and imaging at the initial presentation. Internal fixation with autogenous bone grafting could play a role in managing this rare condition. Wrist arthroscopy can be necessary for interosseous ligament injury diagnosis.