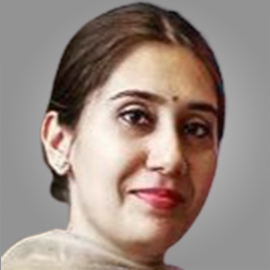 Introduction: Epidermoid cyst is a benign tumor frequently observed throughout the body. It can grow in size and may get infected over a period of time. However, pre-coccygeal epidermoid cysts are rare.

Observation: We are reporting a case of a pre-coccygeal epidermoid cyst in a 27-year-old female, which was managed successfully. It was a type 1 tumor that was operated via a posterior parasacral approach.

Conclusion: Precoccygeal epidermoid cyst is not a common and precise diagnosis, and treatment leads to excellent results. The recurrence rate is less than 3% if proper excision is carried out.

Epidermal inclusion cysts are the most common cutaneous cysts and can occur anywhere on the body. These cysts typically present as fluctuant nodules under the skin’s surface, often with visible central puncta. These cysts often become painful to the patient and may present as a fluctuant-filled nodule below the patient’s skin [1].

There are numerous synonyms for epidermal inclusion cysts, including epidermoid cyst, epidermal cyst, infundibular cyst, inclusion cyst, and keratin cyst. These cysts can occur anywhere on the body, typically present as nodules directly underneath the patient’s skin, and often have a visible central punctum [1].

The center of epidermoid cysts almost always contains keratin and not sebum. This keratin often has a “cheesy” appearance. They also do not originate from sebaceous glands; therefore, epidermal inclusion cysts are not sebaceous cysts. The term “sebaceous” cyst should not be used when describing an “epidermoid” cyst. Unfortunately, in practice, the terms are often used interchangeably [2].

Spinal epidermoid cysts are uncommon. They comprise between 0.5% and 1% of all spinal tumors but account for up to 10% of intraspinal tumors in children [3].

Epidermoid cysts are benign. Histologically, they consist of stratified squamous epithelium supported by an outer layer of collagenous tissue. Progressive desquamation and breakdown of keratin from the epithelial lining into the interior of the cyst produce the characteristic content [5].

Spinal epidermoid cysts are slow-growing. Therefore, surgery is the treatment of choice. Complete excision is usually possible and is curative [4]. If the cyst wall is tightly adherent to the cord parenchyma, the wall should be left in place; however, this leads to a risk of recurrence [6].

A 27-year-old female patient presented to the outpatient department with chief complaints of swelling in the perianal region for the past two years. There was no history of Constipation, loss of control over micturition, or defecation. The gait was normal.

Her menstrual history was insignificant. However, her menstrual periods were regular; there was no dysmenorrhea.

On examination, the abdomen was soft, non-distended, and non-tender. There was a 7 cm × 3 cm swelling in the sacral region, extending into the gluteal region on the left side (Figure 2). There was no cough impulse, and the swelling was non-reducible, non-tender, and a lower limit could not be felt. There were no distended veins, sinus, or openings over the surface.

Ultrasonography of the gluteal region showed well a defined cystic lesion 10 cm × 10 cm × 9 cm extending into the left gluteal region from the left adnexa, suggestive of an epidermoid cyst (Figure 1).

FNAC of the swelling revealed a keratinous cyst (Figure 3). 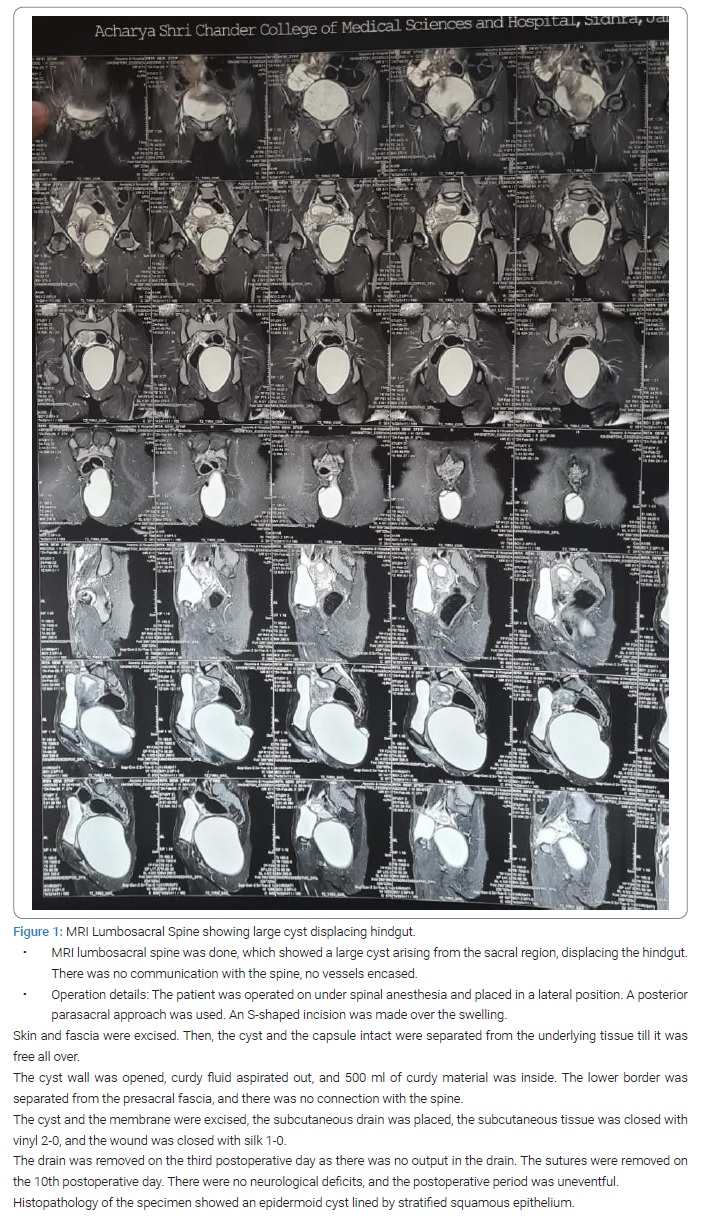 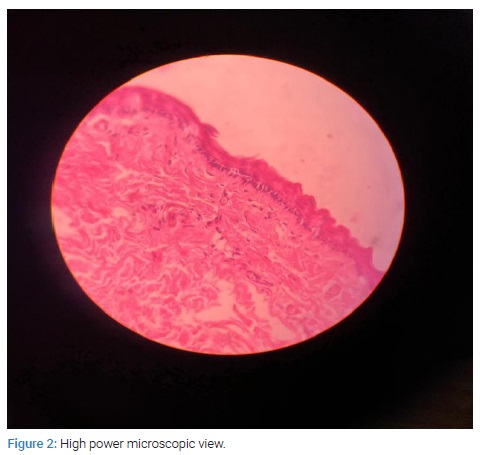 Presacral or retrorectal space tumors are a rare heterogeneous group of tumors that can be benign or malignant.

Retrorectal tumors are lesions confined to the presacral space in front of the lower part of the sacrum and coccyx.

The classification system described by Uhlig and Johnson and modified by Lovelady and Dockerty is commonly used to grade retrorectal tumors. According to this classification, retrorectal tumors are divided into five categories: congenital, inflammatory, neurogenic, osteogenic, and others. In addition, neoplastic tumors and inflammation with cystic degeneration have also been described in the perirectal region. These include Gastrointestinal Stromal Tumors (GIST), neurogenic tumors, anorectal carcinomas, and perineal abscesses [7,8].

About half of all developmental cysts described are hamartomas/mucinous cysts (including tailgut cysts), dermoid/epidermoid cysts, teratomas, and rectal duplication cysts [7,8].

The precise diagnosis and appropriate treatment are very important for tumors in this region because an incorrect or insufficient first surgical treatment can complicate further management, like the risk of recurrence and fecal incontinence. On the other hand, the prognosis and outcome of these lesions are excellent, with a recurrence rate of only 3% [9,10].

The study conducted by Whittaker and Pemberton between 1922 and 1936 reported 22 retro coccygeal tumors. Of these, ten were benign (9 dermoid cysts and one fibroma), and the remaining tumors were malignant. An epidermoid cyst was not detected in any of the cases in the study [11].

The embryologic development in presacral space is complex due to the presence of totipotential germ cells that differentiate into three germ cell layers; hence this area is prone to numerous tumor pathologies and diverse histopathological findings [12].

A surgical approach can be decided if we classify according to tumor location [13].

Type 1: the lesion is located at the coccyx level (below S3) and separated from the bony trunk of sacrococcyx.

Type 2 as type 1 but connected with the coccyx sacrum.

The case mentioned was a type 1 tumor, hence was resected using a posterior parasacral approach.

It is a common belief that all presacral lesions, even small benign cysts, should be removed as cysts can become infected, have a malignant transformation, or they can enlarge and make the surgery more complicated [12].

The presacral region is a potential space, and its boundaries are:

Rectum anteriorly, presacral fascia posteriorly, peritoneal recess is its superior border, while the levator ani muscle is its inferior wall; its lateral borders are delineated by the iliac vessels and ureters. This space includes multiple branches of the sacral plexus, the pelvic visceral nerves, hypogastric nerves, and autonomic innervations from the superior and inferior hypogastric plexus. Iliosacral, middle rectal, medium sacral vessels, and plexuses of the presacral vein create a rich vascular network here [16].

Due to non-specific clinical symptoms, the presacral tumors are usually presented late and are relatively rare.

Benign lesions are more common and generally have a good prognosis Surgical approach depends upon the location of the tumor concerning the S3 level.

The authors would like to thank the head of the department, Surgical colleagues, Anaesthetists, and OT staff of ASCOMS, Jammu, India.

The authors received no financial support for the research, authorship, or publication of this article.

© 2022 Samia Mohan. This is an open access article distributed under the terms of the Creative Commons Attribution 4.0 International License (CC BY-4.0).