The incidence of Congenital Diaphragmatic Hernia (CDH) ranges from 1.7 to 5.7 per 10,000 live births. There is significant mortality and morbidity despite recent advancements in the management of CDH. The survival of CDH is 60% to 70% in high-volume centers. Antenatal ultrasound helps in diagnosis. The use of MRI is also increasing for the evaluation of CDH. In selected cases, antenatal interventions may be considered. After birth, appropriate management has improved the outcome. Immediate intubation and gentle ventilation are important. Pulmonary hypertension is a common association, and its severity determines the outcome. Usually, surgery is delayed till optimization by medical stabilization is achieved. The scope of minimally invasive surgery is still to be defined. The role of Extra Corporeal Membrane Oxygenation (ECMO) to improve the outcome is debatable. Multidisciplinary follow-up is needed to manage the high incidence of comorbidities. This study aims to present the single surgeon’s experience in the management of CDH in a series of seven neonates and review the literature. The role of poor predictors of outcome, including prematurity, low birth weight, pulmonary hypertension, pulmonary agenesis, pulmonary hypoplasia, and barotrauma, are evaluated. Four neonates survived and are growing well. Three neonates with pulmonary hypertension died who also had agenesis of ipsilateral lung and hypoplasia of contralateral lung. Our survival is 57%, and mortality is 43%.

The reported Congenital Diaphragmatic Hernia (CDH) incidence ranges from 1.5 to 5.7 per 10,000 live births [1]. The diaphragm develops from pleuro-peritoneal membranes and septum transversum at 8-weeks of gestational age [1,2]. The postero-lateral defect in the diaphragm usually occurs in 85% of cases on the left side but occurs in 15% of the cases on the right side [1–3]. Bilateral defects are rare (< 1%). Although the etiology is unknown, 2% of the cases are noted to be familial. CDH may be associated with other anomalies. There may be agenesis of one or more lobes or complete agenesis of the ipsilateral lung with hypoplasia of the contralateral lung [4–7].

Antenatal ultrasound is a routine in most developing countries [8,9]. Magnetic Resonance Imaging (MRI) is increasingly being used for evaluation [1,2,10]. Antenatal diagnosis helps to plan delivery by the cesarian section. Undiagnosed infants usually present with acute respiratory distress in the neonatal period. Milder forms of CDH may present at a later age with respiratory or gastrointestinal symptoms. Chest X-Ray shows opacified ipsilateral chest with herniation of bowel loops and mediastinal shift to the contralateral side. Intestinal gas may be seen in the chest [5]. The nasogastric tube is usually seen deviated to the opposite side of the lesion. Upper intestinal contrast study helps to differentiate between CDH and Congenital Cystic Adenomatoid Malformation (CCAM) [6]. An echocardiogram is done to evaluate associated congenital cardiac defects. The right ventricular function is evaluated to determine the severity of pulmonary hypertension [7].

Infants with CDH should be intubated and gently ventilated. Face mask ventilation can cause distension of herniated intestine leading to respiratory embarrassment. A nasogastric tube is inserted for decompression of the intestine. Standard protocols are recommended for gentle ventilation and aggressive treatment of pulmonary hypertension [11,12].

Surgical repair is done after optimizing blood pressure, blood gases and ensuring adequate urine output [13–15]. After reducing abdominal contents from the chest, the primary closure of the diaphragmatic defect is usually possible, with non-absorbable suture material. In some cases of CDH, primary closure may not be possible when a prosthetic patch of Gortex Mesh is used. Primary abdominal wall closure may be possible in many cases. Still, in some cases, only skin closure may be indicated to avoid abdominal compartment syndrome, with the repair of ventral hernia at a later age. A regular follow-up by a multi-disciplinary team is required to manage long-term issues, like pectus-excavatum, and to ensure high quality of life in these children.

This study aims to present the single surgeon’s experience in the management of CDH in a series of seven neonates and review of the literature. Four neonates survived and are growing well. Three neonates with pulmonary hypertension, two with right-sided CDH and one with left-sided CDH, died due to agenesis of ipsilateral lung and severe hypoplasia of contralateral lung. Our survival is 57% and mortality is 43%. The role of variables including gestational age, birth weight, associated anomalies and pulmonary hypertension are evaluated as contributing factors to the outcome.

This is a retrospective study of seven consecutive patients of Congenital Diaphragmatic Hernia (CDH) born in our hospital and underwent management between December 2012 and March 2020 by a single pediatric surgeon. All patients presented with respiratory distress at birth and needed mechanical ventilation. The diagnosis was confirmed on CXR in all the patients (Figure 1,2). Three patients had right-sided CDH, and four patients had left-sided CDH. All the babies born with CDH were managed to optimize prior to repair. Two patients with left-sided CDH and one with right-sided CDH were found to have pulmonary hypertension with poor ventricular function on echocardiography and they all died after surgery. All the neonates were treated with surfactant. Dobutamine was used to treat pulmonary hypertention. One patient who died with right sided CDH was treated with high frequency ventilation. Another patient who died also had associated arthrogryposis multiplex with bilateral TEV and another baby who died also had intraventricular hemorrhage on the preoperative brain ultrasound. There were no associated anomalies in all survivors. 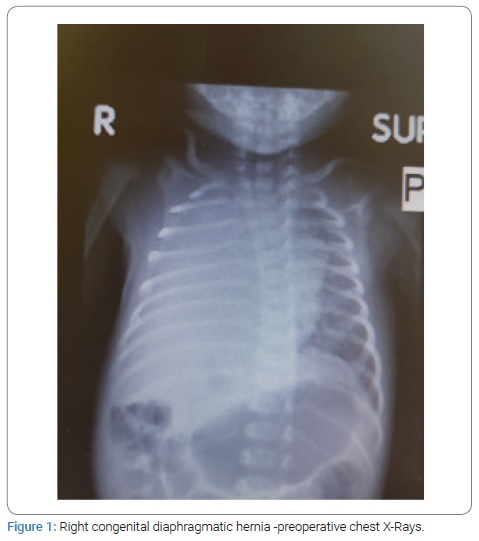 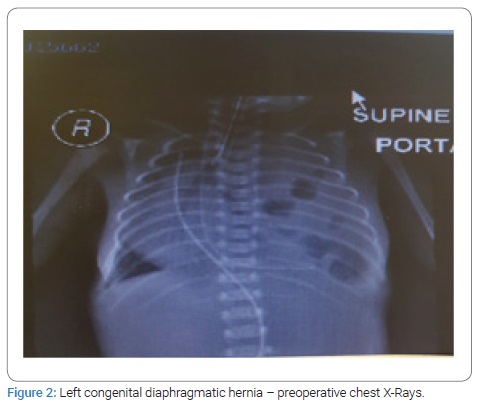 Surgical repair through abdominal approach with subcostal incision was used in all cases after optimization of blood pressure, blood gases, and ensuring adequate urine output. The laparoscopic/VATS approach was not preferred due to the lack of appropriate facilities and the reports of high risk of recurrence in the literature. After reduction of abdominal contents from the chest, primary closure of diaphragmatic defect was possible in all cases, using non-absorbable suture material. Primary abdominal wall closure was possible in five cases, but in two cases with right-sided CDH, only skin closure was possible to avoid abdominal compartment syndrome, with the repair of ventral hernia at a later age. All patients had intact diaphragm on post-operative CXR (Figure 3,4). All four survivors were followed up in the out-patient clinics with a mean follow-up of 4 years and were found to be growing well without any complication. Gender, gestational age, birth weight, duration of NICU hospitalization, symptpms,  diagnosis, associated anomalies, and duration of ventilatory support, surgical treatment and outcome of all the neonates are summarized in Table 1. 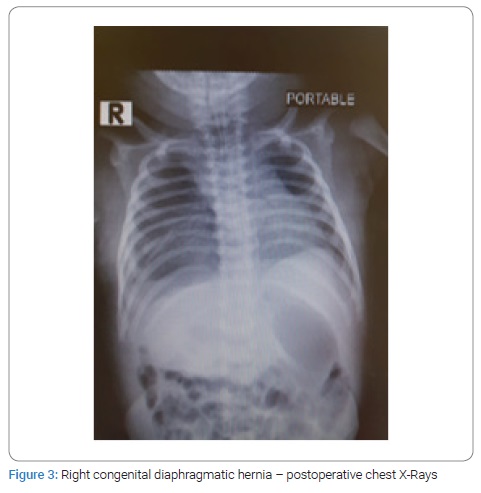 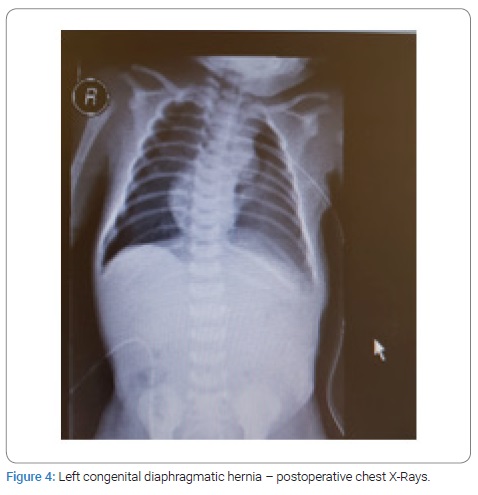 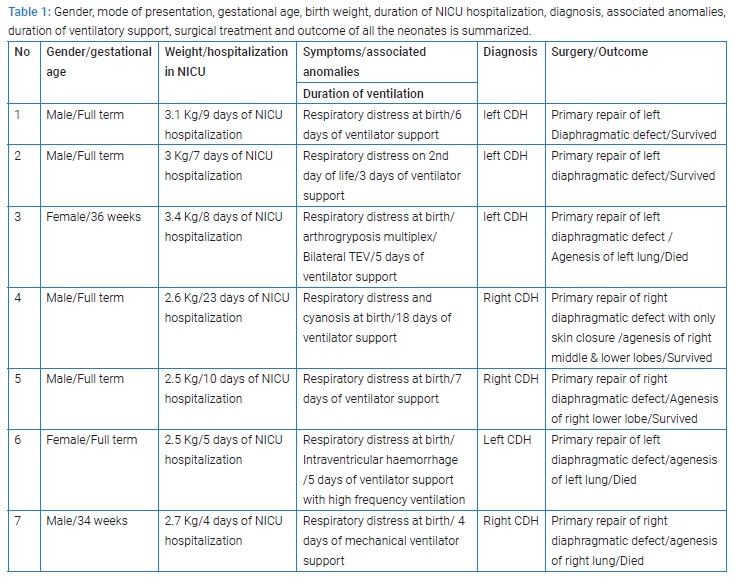 In this series, three neonates had a Congenital Diaphragmatic Hernia (CDH) on the right side of the chest, and four neonates had CDH on the left side. Four patients survived without any peri-operative comlications. Two neonates with left-sided CDH, who died, had pulmonary hypertension with poor ventricular function. In addition there was agenesis of the left lung with contralateral pulmonary hypoplasia in each patient. One neonate with left-sided CDH who died also had associated arthrogryposis multiplex. One neonate, 34 weeks gestational age, with right-sided CDH, died. This neonate also had agenesis of the right lung with hypoplastic left lung, and had an intraventricular hemorrhage on the preoperative brain ultrasound. This neonate also had barotrauma which was treated by left chest intercostal tube insertion. The survival in this series is 57%, and the mortality is 43%. There was no recurrence of the hernia. All the four children were followed up in outpatient clinics with mean follow up of four years and are growing well without any long-term complications.

The incidence of Congenital Diaphragmatic Hernia (CDH) is reported as 1:2400 births [3,11]. Overall mortality is 35% [16,17]. In our series, the survival rate is 57%, and mortality is 43%. In 1754, Macauley and Hunter performed an autopsy of a boy born with breathing difficulty when intestine was found in the chest and the opposite lung was found hypoplastic [18,19]. Barotrauma was found to be contributing factor towards higher mortality in these patients. Thus, it was concluded that gentle ventilation is mandatory during the respiratory support of these patients [20,21]. In our series, one of the neonates, who died, also had barotrauma. In the 1990s, upgrading of ventilators, avoiding paralysis, and gentle ventilation improved the survival rate in these patients [20–23]. During the period from 1980 till 1984, developments of pediatric ventilators lead to the concept of hyperventilation.

The use of Extra Corporeal Membrane Oxygenation (ECMO) to manage pulmonary hypertension was promoted in the following period [23–26]. Immediate surgery was considered to improve survival during the period from 1980 until 1987, along with the use of hyperventilation and ECMO but the survival could not be improved [27]. Thus, it was concluded that delayed surgical repair after optimization improved survival. In the 1990s, echocardiograms helped to evaluate associated congenital cardiac defects contributing to high mortality in these patients. In our series, echocardiography was used in all cases to evaluate associated congenital cardiac defects and pulmonary hypertension. In CDH, agenesis of the ipsilateral lung and hypoplasia of the contralateral lung is the primary determinant of the patient’s survival. Pulmonary hypoplasia results in respiratory insufficiency and pulmonary hypertension [28]. In our series, all the three neonates who died had pulmonary hypertension, ipsilateral lung agenesis, and contralateral lung hypoplasia. According to the literature, inhaled nitric oxide is used to manage pulmonary hypertension [28-31]. We did not use inhaled nitric oxide in our series. However, we used dobutamine in all neonates with pulmonary hypertension. ECMO is a more expensive option without significant improvement in survival and there is a risk of hemorrhage. The literature review reveals conflicting data concerning the poor prognosis of right-sided CDH compared to left-sided CDH. In our series, three patients had right-sided CDH, and four patients had left-sided CDH. Right sided CDH without complete agenesis of ipsilateral lung as such did not appear to be a significant poor prognostic factor in this series.

The right lung contributes 57% of the total lung volume, and any compromise on its development may have a significant clinical impact [18]. The size of the defect is usually more on the right side due to herniation of the liver into the chest. The concept of surgical repair of CDH has changed from performing emergency surgery to delaying the repair for at least 24 hours to 48 hours to optimize the patient prior to surgery. In our series, all neonates were optimized prior to surgical repair for 48 hours to 72 hours in terms of blood pressure, blood gases, and ensuring adequate urine output. Different surgical approaches exist, including the abdominal approach, thoracic approach, laparoscopic or Video Assisted Thoraco Scopy (VATS) technique [12–14]. In our series laparoscopic/ VATS approach was not considered due to lack of appropriate facilities and reports of higher recurrence rates in the literature [32].

Despite recent improvements in management, CDH remains a challenging condition. Pulmonary hypertension, barotrauma, agenesis of ipsilateral lung, hypoplasia of contralateral lung, prematurity and associated congenital anomalies are poor predictors of outcome in CDH. Further studies are required to improve survival in CDH. Long-term follow-up by a multidisciplinary team is needed to ensure high quality of life in these children.

© 2021  Mumtaz H Khan. This is an open access article distributed under the terms of the Creative Commons Attribution 4.0 International License (CC BY-4.0).