Results: A total of six cases on caecal metastases from breast cancer were identified (five published and one local case). The age of patients at time of diagnosis ranged from 38 years to 76 years. One of the patients was male and five patients were female. The presentations included large bowel obstruction at caecum, positive fecal occult blood test, rectal bleeding, symptomatic anemia, acute appendicitis and caecal bowel perforation. Four patients underwent right hemi-colectomy and two patients were treated with chemotherapy only. Five patients were alive at 12 months follow-up.

Conclusion: The current review of cases suggests a potential guidance on management of caecal metastasis in breast cancer with surgery and hormone therapy. Further research is warranted.

We identified all case reports on caecal metastases from breast cancer using PUBMED (1950–2021) and MEDLINE (1950–2021). The search strategy included the following keywords: caecum (title/abstract) and breast cancer (title/abstract) and metastases (title/abstract). The search did not include letters, systemic reviews, meta-analysis and editorials. The case reports written only in the English language were included. An additional case encountered in our local healthcare facility was included in the results. The first author (Park S) independently extracted data on the year and author of the published case, patients’ characteristics, presenting symptom, treatment modality and 12-month survival after obtaining an informed consent from the patient.

We identified six cases of caecal metastases from breast cancer, consisting of five published cases and one local case. Patients’ characteristics including age at time of diagnosis and gender, presenting symptoms, histopathology of the caecal metastases, treatment and survival at 12 months are summarized in (Table 1). 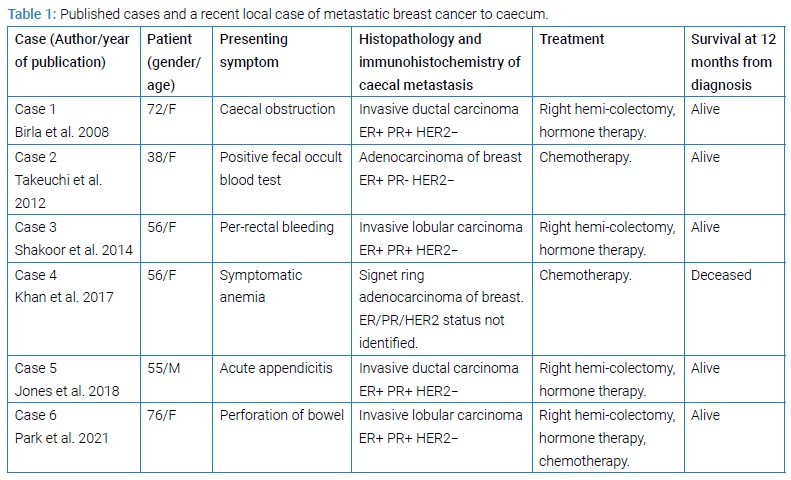 The age of patients at time of diagnosis ranged from 38 years to 76 years. There was one male patient and the rest of the five patients were female. The clinical presentations included large bowel obstruction at caecum, positive fecal occult blood test, rectal bleeding, symptomatic anemia, acute appendicitis and caecal bowel perforation. All the patients were alive at 12 months from the diagnosis of caecal metastasis except for a 56-year-old female patient (Case 4) who had concurrent widespread metastases.The histopathology of caecal metastases consisted of two invasive ductal carcinomas, two invasive lobular carcinomas, one adenocarcinoma of breast and one signet ring adenocarcinoma originating from breast tissue. Except for the case with signet ring adenocarcinoma, all the metastases had positive Estrogen Receptor (ER), and negative Human Epidermal Growth Factor Receptor 2 (HER2) stains on immunohistochemistry analysis.

Case 1: A 72-year-old female on a background history of breast cancer presented with abdominal distension and pain. Subsequent imaging confirmed large bowel obstruction secondary to caecal mass, suspicious for malignancy. The patient underwent an emergency right hemi-colectomy for acute large bowel obstruction. Her histopathology and immunohistochemistry of the caecum showed invasive ductal carcinoma. She was commenced on hormone therapy post-operatively, and alive at the 12-month follow-up [1].

Case 2: A young female patient aged 38 years with previous history of bilateral breast cancer had positive fecal occult blood test on a routine screening test. She was found to have small metastatic deposits in caecum and stomach on endoscopic examination. The histopathology tests of the biopsies of caecum and stomach showed adenocarcinoma, with primary breast cancer cells found on subsequent immunohistochemical analysis. Given concurrent distal organ metastasis to stomach and absence of acute surgical emergency, the patient was treated with chemotherapy only without a surgical resection of the metastasis. She was alive at 12 months’ follow-up [3].

Case 3: A 56-year-old lady with no prior history of breast cancer presented with acute rectal bleeding to an emergency department. Colonoscopy revealed metastatic deposits in the caecum. Subsequent staging Computed Tomography (CT) scan did not reveal other distant metastases. Shortly after the scan, right hemi-colectomy was performed. The result of histopathology showed invasive lobular carcinoma. She was monitored at 12 months after the diagnosis and remained stable [4].

Case 4: A 56-year-old female patient presented to hospital with progressive lethargy. She was found to have severe anemia on further work-up. The patient did not have previous history of breast cancer. Subsequent imaging and endoscopy revealed widespread metastatic disease to lymph nodes, bone, bladder, pancreas, stomach, small bowel and right-sided colon including caecum. Biopsies from the caecum and the lymph node showed signet ring cell adenocarcinoma. Deoxyribonucleic Acid (DNA) microarray test of the biopsied lymph node revealed the primary tissue of signet ring cell adenocarcinoma originating from the breast tissue. Given the widespread metastatic disease, the caecal metastasis was deemed unsuitable for surgical resection. Palliative chemotherapy was commenced immediately, but the patient passed away shortly after. An autopsy examination revealed a right-sided breast cancer with extensive metastases in small intestine, stomach and colon [5].

Case 5: A male patient aged 55 with background history of breast cancer presented to the emergency department with right-sided abdominal pain. His CT scan revealed acute appendicitis and 23 mm caecal mass. Once the caecal mass was viewed intra-operatively, right hemi-colectomy was performed. The patient was commenced on hormone therapy post-operatively. The histopathology showed invasive ductal carcinoma. Patient was alive at the 12 month follow-up [6]. 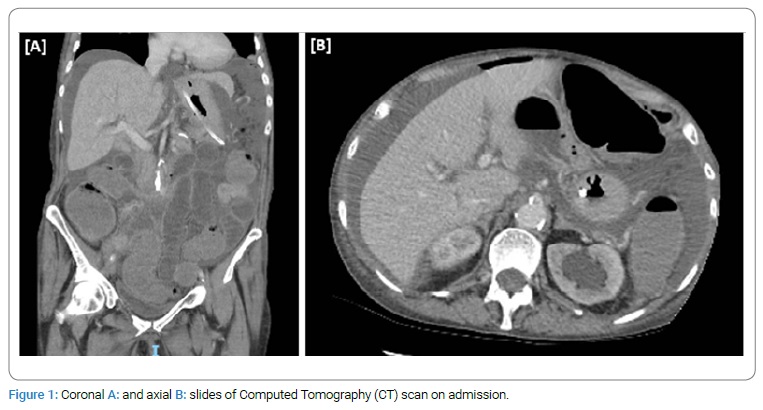 Breast cancer is the most common malignancy in women, affecting approximately 1 in 8 patients [7]. Despite the recent advancement in treatment modalities and cancer screening programs, more than 50 percent of the patients with breast cancer have recurrence or metastasis. A large study of 1238 patients by Jain et al. 1993, assessed the sites of metastasis in breast cancer according to its histological appearances. It showed that invasive ductal carcinoma metastasized more commonly to lung, pleura and brain whereas the invasive lobular carcinoma metastasized commonly to bone marrow and peritoneum [8]. However, metastases to GIT from breast cancer are uncommon, occurring in only 4 to 18 percent of patients with metastatic breast cancer. The most commonly involved GIT organ reports is the stomach. The colon is one of the uncommon sites, found in only 3 percent of patients with GIT metastases from breast cancer [9].

Metastases to the caecum, which is the first part of colon, are even rarer with only five cases reported in literature. Additionally, we have recently had another patient who had metastatic breast cancer to caecum in a local health facility. With inclusion of our case, a total of six cases of caecal metastasis from breast cancer have been described and reviewed in the current report. Majority of the patients underwent surgical resection of the caecal metastasis with right hemi-colectomy at the time of diagnosis. All of the patients who underwent the right hemi-colectomy continued their hormone therapy after the surgery and all achieved 12-month survival. Surgical resection was not performed in two patients due to concurrent distal organ metastases, one of them with extensive widespread metastases (Case 4). Systemic chemotherapy was commenced in the two patients, and one of them died prior to the 12-month follow-up.

There were two cases of invasive lobular carcinoma and two cases of invasive ductal carcinoma in our case series. Interestingly, breast cancer with extra-hepatic GIT metastases has been associated more commonly with the lobular carcinoma subtype rather than the invasive ductal carcinoma [10]. Recurrence of metastatic disease in lobular breast carcinoma can occur many years after the initial diagnosis of primary cancer [11]. Presenting symptoms of GIT metastases from breast cancer differs according to the site of metastases, and often are non-specific, making early diagnosis challenging. In fact, isolated GIT metastases from breast cancer are found less commonly than the primary GIT cancers or benign lesions in patients with previous history of breast cancer. The findings on imaging are non-specific for caecal metastasis [12]. Thus, a history of breast cancer does not necessarily imply GIT metastases when patients present with symptomatic caecal tumor. The most accurate way to differentiate metastatic and primary caecal tumor is a histopathology examination of the surgical specimen. The absence of dysplasia in colonic epithelium and the similarity to the previous breast cancer in histological morphology suggest a metastasis rather than a primary neoplasm [13]. It is hence critical to be aware of the disease and consider it as a differential diagnosis when a caecal mass is found in a patient with a history of breast cancer. Following prompt investigation with radiology and endoscopy allows early diagnosis and treatment, which may improve the overall patient outcome [14]. Given the high rarity of the disease, there are currently no specific guidelines on management of the caecal metastasis from breast cancer. In fact, there has not been a single review of cases on caecal metastases from breast cancer. A case review on metastatic breast cancer to the GIT by Ambroggi et al. 2012, has suggested surgical resection of the gastrointestinal metastasis where possible followed by hormonal therapy and chemotherapy as an effective treatment in metastatic breast cancer involving GIT [15]. A recent systemic review on 96 cases of intestinal metastases from breast cancer by Bolaz Acchini et al. 2021 also recommended prompt diagnosis and surgical resection, followed by adjuvant chemotherapy and/or hormone therapy as the mainstay management strategy [12]. A similar conclusion could be drawn from our review on caecal metastases as all of the patients who had a right hemi-colectomy followed by hormonal therapy achieved a 12 month survival.

The current report shows a brief overview of reported and experienced cases of caecal metastases from breast cancer. Although it is a rare pathology, it is critical for the clinicians to be aware of its manifestation, diagnosis and management. In addition to its rarity, non-specific symptoms and unpredictable timing of recurrence make early diagnosis difficult. Previous literature and our experience suggest surgical resection where possible, followed by systemic and/or hormone therapy. Hopefully, the current review contributes to increasing awareness on caecal metastases in breast cancer and its management. Further study in a multi-centre is warranted.

The authors thank the Department of General Surgery, Moruya District Hospital and the Canberra Hospital for the support provided to publish the review.

© 2021 Park S. This is an open access article distributed under the terms of the Creative Commons Attribution 4.0 International License (CC BY-4.0).