Introduction: Enterovesical Fistula (EVF) is a rare condition in abnormal communication between the intestine and bladder. Colonic diverticulosis is the most common cause of EVF, accounting for 50% to 70% of cases. The primary goal of treatment for EVF is resection of the diseased bowel; however, there is still no consensus on Bladder Fistula (BF) management.  This study aimed to describe the clinical characteristics, practice pattern, and surgical outcomes of EVF due to colonic diverticulitis by comparing resection with separation of BF.

Materials and Methods: This retrospective study enrolled 23 patients with EVF due to diverticulitis between January, 1985 and December, 2020. Among them, 21 patients who underwent diseased bowel resection were divided into BF resection (n = 8) and separation (n = 13) groups. The patients’ clinical characteristics, surgical methods, surgical outcomes, and postoperative complications were compared.

Results: All patients in the BF resection group had simple fistulas located on the superior surface of the bladder. Whereas 61.5% of patients in the separation group had complicated fistulas with abscess formation, and 46.2% of them had BFs located on the posterior surface. Regarding the method of bladder wall repair, all patients in the resection group underwent double-layer suture closure, 53.8% in the separation group underwent single-layer suture closure, and the remaining 46.2% were unrepaired because no defects were found. In addition, there was no significant difference in operative time, estimated blood loss, or postoperative complications between the two groups, and there was no fistula recurrence in either group (median follow-up period: 33.5 months).

Conclusion: This study suggested that the site of the fistula on the bladder wall and the presence or absence of abscess could have influenced the choice of resection or separation of BF.

Enterovesical Fistula (EVF) is an unusual and rare condition in which the bowel and bladder communicate abnormally. EVF causes fecaluria, micturition pain, and recurrent urinary tract infections, which reduce the quality of life [1–3]. Colonic diverticulosis is the most common cause of EVF, accounting for 50% to 70% of cases. Other causes include colorectal cancer, inflammatory bowel diseases such as Crohn’s disease, radiation therapy, trauma, and gastrointestinal perforation [1,4]. The primary goal of EVF treatment is resection of the diseased bowel, regardless of the benign or malignant pathology [5,6]. For malignant pathologies, complete en bloc resection of the Bladder Fistula (BF) is necessary to ensure surgical margin [7–9]. In this regard, partial cystectomies and, in some cases, total cystectomies are performed. However, if the cause is benign, such as in diverticulitis, these surgeries can be excessively invasive. Although there is no consensus on the management of BFs in EVF due to diverticulitis, some studies have reported that BF resection is not necessary, and fistula separation alone can suffice [1,6,10–15]. The purpose of this study was to describe the clinical characteristics, practice patterns, and surgical outcomes of EVF due to colonic diverticulitis by comparing resection with separation of BF.

Twenty-three cases of EVF due to colonic diverticulitis diagnosed at Okinawa Chubu Hospital between January, 1985 and December, 2020 were enrolled. The data collected from inpatient and outpatient medical records were age, sex, Body Mass Index (BMI), symptoms, pre-existing diseases, and images diagnosed as fistulas. Two of the 23 patients were excluded because they did not undergo bowel resection because of surgical intolerance. One of them only underwent a cystostomy. The remaining 21 patients who underwent diseased bowel resection were divided into two groups: resection (n = 8) and separation (n = 13) groups in which the fistulas were resected in the former, and the bowel and bladder were separated in the latter group. We compared age, sex, ASA-PS, BMI, clinical parameters, rate of abscess formation, BF site, method of bladder repair, operative time, blood loss, postoperative hospital stay, and postoperative complications between the two groups.

Statistical analyses were performed using StatView (version 5.0; SAS Institute Inc., Cary, NC, USA). Data were presented as the median and Interquartile Range (IQR) or as number and percentage (%) accordingly. The chi-squared test was used to compare the proportion of categorical variables, whereas the Mann-Whitney U test was used to compare the medians of continuous variables. We conducted a univariate analysis to compare variables in both groups to assess BF management’s surgical methods. A p-value of 0.05 was considered to be indicative of statistical significance.

When we Summarizes (Table 1) the clinical characteristics of all 23 patients with EVF. The median age was 60 years. Most of them were men (17 [73.9%]). Three patients (13%) had a history of treatment for urinary tract infection. Only two patients (8.7%) had a history of previous inpatient treatment for diverticulitis, and the remaining 21 patients were all first-time admissions for diverticulitis. Of the six female patients, three (50%) had undergone hysterectomy. Fecaluria and pneumaturia were present in 21 (91.3%) and 11 (47.8%) patients, and 10 patients (43.5%) had both fecaluria and pneumaturia. (Table 2) shows the details of the diagnostic tests used. Computed Tomography (CT) was the most common diagnostic test for EVF in 21 patients (91.3%), selective fistulography under colonoscopy in seven patients (30.4%), and cystoscopy in three patients (13%).

Of the 21 patients who underwent diseased bowel resection, eight (38.1%) underwent resection of the BF, and 13 (61.9%) underwent separation. 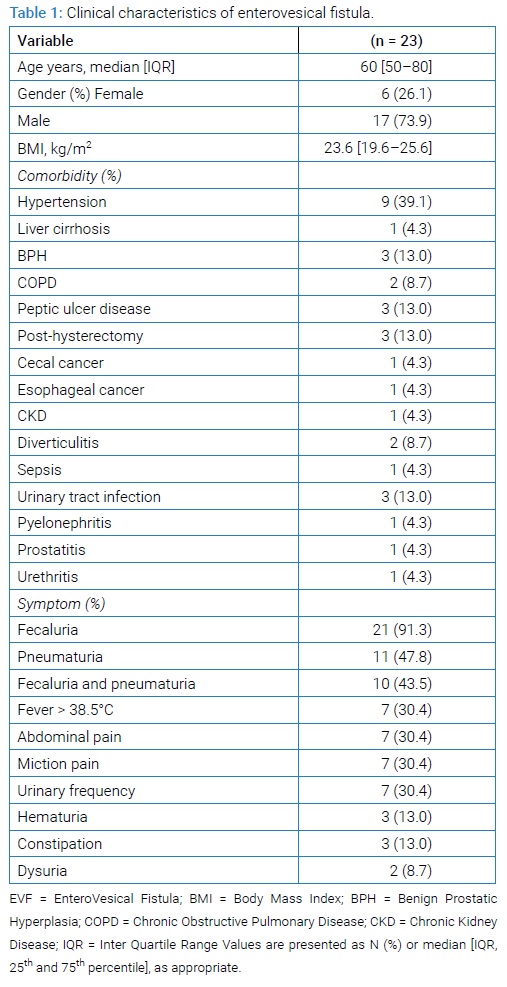 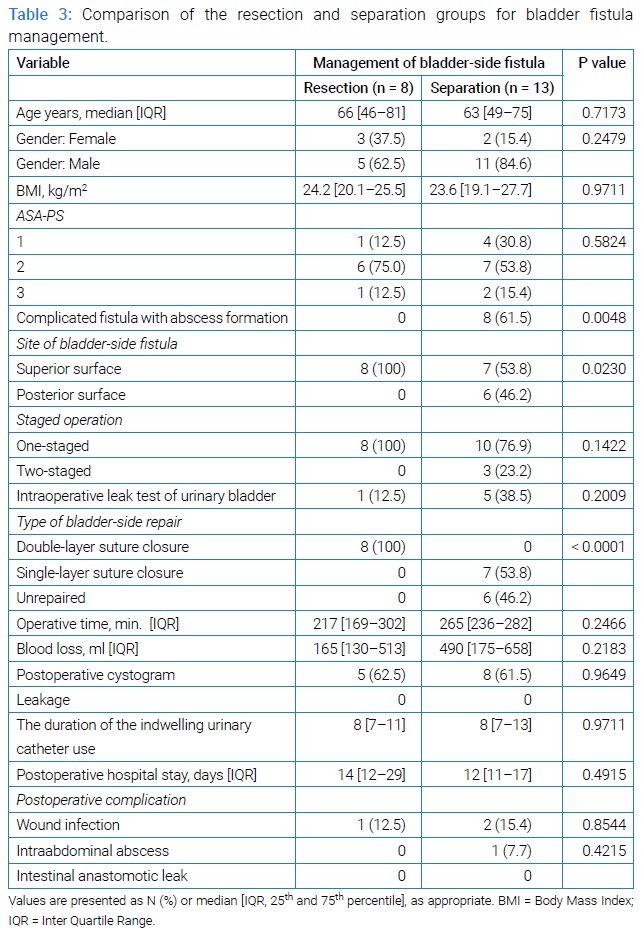 One-stage bowel resection and primary anastomosis were performed in all eight patients of the resection group and in 10 patients of the separation group. The remaining 3 patients in the latter group either underwent a transverse colostomy prior to surgery for EVF, Hartmann procedure, or a diverting ileostomy. Although the estimated blood loss was more and the operative time was prolonged in the separation group, there was no significant difference noted. The median duration of indwelling urinary catheter postoperatively was 8 days in both groups (p = 0.9711).

Arriving at a consensus on the management of BFs due to benign disease such as diverticulitis has been difficult [6,7,16]. Although various methods have been reported, such as partial cystectomy, ‘pinch off’ technique’ with blunt dissection between the bladder and the bowel, suturing of bladder defects, closure with greater omental flap, and unrepaired with indwelling urethral catheter only, there are no randomized controlled trials to verify which is the best method [1,17–20]. A few retrospective studies and case reports have suggested that resection of the BF is not always necessary, but we could not find any actual comparative study [12]. The present study indicated that our choice of procedure for EVF due to diverticulitis based on the location of BF and the presence of abscess formation. Since there was no recurrence of fistula in both groups, this study could not determine the superiority of resection versus separation for BF. However, the presence of preoperative abscess formation might have affected the occurrence of postoperative SSI.

With respect to the choice of the surgical procedure for the management of BFs, considering the simple nature of fistulas in the resection group, and their location on the superior wall of the bladder, there was little risk of injury to important structures such as the ureters during surgery. Hence, partial cystectomy with resection of BF to the extent that it did not affect function, was probably an acceptable option. Furthermore, posterior fistulas were only in the separation group. The ureters and ureteric orifices are posteriorly located. The choice of fistula separation in all six cases of posterior fistula could have been the surgeons’ intention to avoid injury to the ureters or ureteral orifice. Further, the separation group had complicated fistulas with abscesses. The contact area of fistula with the bladder wall was reported to be larger in complicated cases of inflammatory masses and abscess formation [21]. In this case, BF resection would lead to extensive resection of the bladder wall. Therefore, considering the benign nature of EVF, separation was likely done to avoid this risk.

The decision to repair the bladder when fistula separation is employed is still a matter of concern for surgeons. In the separation group of our study, seven patients underwent single-layer suture closure of the bladder defect, and six patients underwent no repair because there was no gross defect or the leak test was negative. Similarly, Dziki et al. reported a suture repair performed for a case with a positive methylene blue leak test, after which there was no leakage on postoperative cystography and no recurrence [6]. Further, Bertelson et al. recommended the methylene blue leak test to avoid unnecessary bladder repair. If a negative result is obtained, the indwelling urethral catheter could be removed within 7 days postoperatively [22]. The leak test using methylene blue was suggested to be useful in determining the necessity of bladder repair.

There were several limitations to this study. First, it was a retrospective study with a small sample size. Second, the diagnosis of bladder defects and the methods of bladder repair were determined by the individual surgeons. There was no clear protocol on the indications for using leak test for the diagnosis of bladder wall defects or the choice to repair the bladder. Finally, not all patients had long-term follow-up.

This study suggested that the site of the fistula on the bladder wall and presence or absence of abscess could have influenced the choice of resection or separation of BF. Because this was a retrospective study with a small sample size and did not rigorously evaluate the effects of BF resection and separation on postoperative outcomes and fistula recurrence, further large-scale trials are warranted.

© 2021 Masafumi Ie. This is an open access article distributed under the terms of the Creative Commons Attribution 4.0 International License (CC BY-4.0).