A 94-year-old female presented to her family General Practitioner with what appeared to be a large right thigh infected seroma or haematoma. She reported having a painful right thigh lump for 8 weeks with no history of trauma and had also taken antibiotics which did not improve her symptoms. On examination, there was a tender, fluctuant and bruised area approximately 10 by 8 cm in size. Ultrasound confirmed the presence of a large hypoechoic mass in the right groin with well defined margins and multiple septations. The fluid was then aspirated with the first 200 ml being clear and yellow and the remaining fluid being a thicker pink stained fluid. Fluid microscopy showed numerous acute inflammatory cells and moderate numbers of chronic inflammatory cells. Macrophages and amorphous proteinaceous debris were also present however no malignant cells were identified. Culture revealed the growth of Streptococcus mitis of doubtful significance. A review two weeks later showed reaccumulation of the fluid. The patient was then arranged to have exploration, drainage and debridement of the right thigh and groin with an ultrasound guided drain in the interim. Intraoperatively, drainage of fluid, debridement of necrotic tissue, dissection of local lymph nodes and multiple excisional biopsies were taken.

Histopathology on the specimens revealed fibrous and also some fatty tissue infiltrated by a largely necrotic, pleomorphic tumor. The tumor was seen to be extensively infiltrating subcutaneous fatty tissue as well as overlying deep and mid dermis with sparing of the epidermis. Lymph node specimens showed extensive infiltration of tumor. Immunohistochemistry showed the tumor to be positive for AE1 + AE3, p63, CK 5/6 and p16 while being negative for S100, HMB45, Melan-A, CD31, CD34 and Vimentin. The final diagnosis was metastatic poorly differentiated, p16 positive squamous cell carcinoma to the right inguinal lymph node, with peri-capsular extension into the overlying subcutaneous fat and dermis. The primary site most likely being vulva, vagina or anus See (Figure 1). 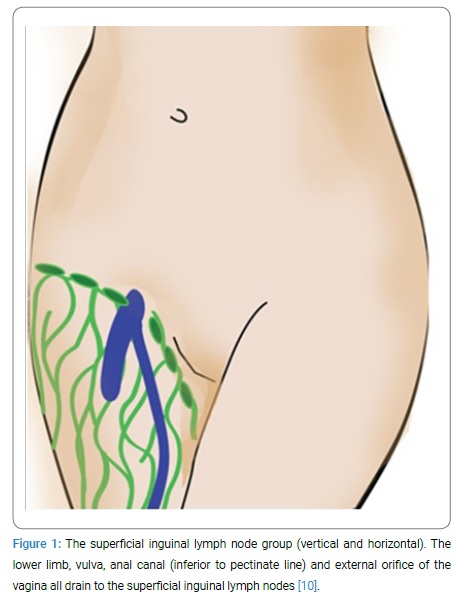 Staging CT did not identify a definite primary or evidence of metastases elsewhere and given her age and frailty further clarification as to the source of the primary was considered irrelevant. She then completed a two week course of palliative radiotherapy but sadly passed away shortly afterwards. Given the anechoic features of this lesion on ultrasound, the color of the aspirated fluid and the lack of any significant growth of microbes it initially appeared that this lesion might be a seroma. Seroma are collections of serous fluid that usually occur as a complication of surgery, but can also be seen post-trauma as a result of direct trauma with tangential impact which is followed by the shearing of the hypodermis from the underlying fascia resulting in a cavity filled with blood, lymph and both viable and necrotic fatty tissue [1–9]. It is always important to consider the differential diagnosis to any surgical presentation such as this, particularly life threatening conditions. Initial imaging cannot always be relied upon for the final diagnosis. This case offers some valuable insight into how malignant poorly differentiated squamous cell carcinoma without any initially obvious primary can present as an infected seroma or haematoma.

© 2021 Zeev Duieb. This is an open access article distributed under the terms of the Creative Commons Attribution 4.0 International License (CC BY-4.0).