Objective: To analyze the frequency, risk factors and management of ectopic pregnancy.

Place and Duration of study: The Department of Obstetrics and Gynecology, Royal Commission Medical Center, Yanbu, Saudi Arabia from January 01, 2015 to December 31, 2019.

Methodology: All women diagnosed with ectopic pregnancy were included in the study. Demographic data, details regarding risk factors and the management were taken into consideration for analysis.

Results: Out of total 11,258 deliveries, there were 75 patients with ectopic pregnancy with frequency of ectopic pregnancy 0.66%. Mean patient age was 29.61 ± 5.31. The majority of patients had previous pregnancies (78.7%). The most frequent (53.3%) gestational age at diagnosis was 5 weeks–7 weeks. The most common clinical presentation was amenorrhea (90.7%) followed by abdominal pain (86.7%.) and vaginal bleeding (57.3%). The most prevalent clinical sign was abdominal tenderness present in 66.7%. Risk factors were not identifiable in 53.3% of patients. Most frequent risk factor noted was history of abdominopelvic surgery (22.7%). Ruptured ectopic was found in most (57.3%) of patients. The majority (96%) of patients had tubal ectopic while one (1.3%) patient had cornual one (1.3%) cervical and one (1.3%) cesarean scar ectopic pregnancy. The most (56.0%) of the ectopic pregnancies were found on the right side. Surgical management was done in majority (86.6%) of patients. Laparotomy was performed in 49.3% and laparoscopy in 36.0% of patients. Salpingectomy was the most frequent (78.7%) surgical procedure done. Thirteen (17.3%) patients were managed medically by injection methotrexate. Ten out of thirteen (76.92%) cases of medical treatment were successful while three (23.07%) proceeded to surgical treatment.

Conclusion: Ectopic pregnancy is a serious gynecological emergency requiring early diagnosis and treatment. The majority of patients were managed by surgical treatment via laparotomy or laparoscopy.

Ectopic pregnancy occurs when a fertilized ovum implants outside uterine cavity [1], usually in the fallopian tube. Ectopic pregnancies implanted at sites other than the fallopian tube such as the cervix, cesarean scar, cornua, ovary, or other abdominal viscera account for roughly 5% of all ectopic pregnancies [2]. The incidence of ectopic pregnancy is estimated at 1% to 2% of all pregnancies [3,4]. Ectopic pregnancy represents a potentially life-threatening diagnosis, in the case of tubal rupture [5] and is responsible for up to 7% of all pregnancy-related deaths [6]. The etiology of EP remains uncertain, although several risk factors have been established, such as previous tubal surgery, previous ectopic pregnancy, use of an intrauterine device, pelvic inflammatory disease, salpingitis, infertility, and smoking [7]. Clinical presentation is variable based on whether it is ruptured or not [8]. The classic triad of symptoms of an ectopic pregnancy includes abdominal pain, bleeding per vaginum and amenorrhea/positive urinary pregnancy test [8]. In current practice, in developed countries, diagnosis relies on a combination of ultrasound scanning and serial serum β-hCG measurements [9]. Treatment is medical with intramuscular methotrexate or surgical via laparotomy or laparoscopy [10] depending on hemodynamic status, future fertility, the levels of β-hCG, status of the tube (ruptured/ unruptured) and ultrasonographic findings [8]. The aim of the study was to analyze the frequency, risk factors and management of ectopic pregnancy.

This cross-sectional study was conducted in the department of Obstetrics and Gynecology of Royal Commission Medical Center, Yanbu, Saudi Arabia over a period of five years from January 1, 2015, till December 31, 2019. The total number of deliveries conducted during this period was 11,258. The labor ward register was used to determine the total number of deliveries for the same period. This study included 75 cases of ectopic pregnancy who were either admitted in emergency or outpatient department. Inclusion criteria was all patients in whom ectopic pregnancy was confirmed. Exclusion criteria was cases in whom ectopic pregnancy was suspected but on laparotomy/laparoscopy not found and women with ectopic pregnancy who discharged against medical advice. Data was collected and recorded on the proforma. Demographic details like age, parity was recorded. Detailed history of presenting complaints like duration of amenorrhea, abdominal pain, vaginal bleeding or spotting, dizziness, shoulder tip pain was noted. Particular attention was made to rule out risk factors like previous abdominopelvic surgery,. previous history of ectopic pregnancy, history of infertility, use of IUCD or Pelvic inflammatory disease. Vital signs evaluation was done to note any tachycardia or hypotension for hemodynamic instability Abdominopelvic examination was performed paying particular attention to signs suggestive of ectopic pregnancy. Clinical diagnosis was made followed by relevant investigation like abdominal or transvaginal ultrasound to confirm the diagnosis. Baseline investigations included complete blood picture, blood group and Rh factor, serum β-hCG. These cases were treated surgically either with laparotomy or laparoscopy or medically with intramuscular methotrexate injection. Patients presenting with hemodynamic shock, having serum β-hCG > 5000 or those suspected to have ruptured ectopic pregnancy were managed with immediate laparotomy. Stable patients with intact ectopic pregnancy and not fulfill criteria for medical treatment or refusing medical treatment were managed by laparoscopy. Patients with minimal symptoms, serum β-hCG < 5000 iu, pregnancy diameter  < 3.5 cm, no fetal cardiac activity, no signs of rupture and who agree for follow up were treated with injection methotrexate. The treatment regimen used in tubal ectopic pregnancies was a single intramuscular dose (50 mg/m2) of methotrexate, if there was a drop of > 15% of serum β-hCG between day 4 and 7 it was measured weekly until reaching non-pregnant level. The treatment dose was repeated after 7 days if there was a drop of < 15% between day 4 and 7 of the first dose. In the event of failure of medical treatment surgical treatment was offered. Data was entered in SPSS (Statistical Package for the Social Sciences), version 27 and analyzed. Data were expressed as mean, standard deviation, number, and percentages.

The most frequent clinical presentation was amenorrhea 68(90.7%) followed by abdominal pain 65(86.7%) and irregular vaginal bleeding 43(57.3%). Seven patients presented as asymptomatic and two patients (2.7%) presented as shock. Diagnosis was made clinically, by serum β-hCG and transvaginal ultrasound. Ectopic pregnancy was found to be ruptured in 43(57.31%) patients while 31(41.3%) were unruptured. Majority 72(96%) of cases where tubal region occurring on the right side in 44(56.0%). Cornual ectopic was found in one patient (1.3%) cervical ectopic in one (1.3%) and cesarean scar ectopic in one patient (1.3%). The majority 65(86.6%) of patients were treated surgically via laparotomy in 37(49.3%)and laparoscopy in 37(36.0%) patients. Salpingectomy was done inmost 59(78.7%) patients. Other procedures include Salpingostomy, milking of the tube, excision of ectopic pregnancy from scar site and repair of defect via laparotomy because this was a cesarean scar pregnancy and suction curettage to remove cervical ectopic pregnancy in one patient. Medical management with injection methotrexate was done in 13(17.3%) patients (Table 2). 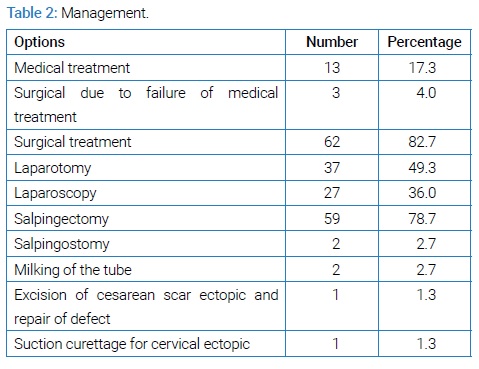 Ectopic pregnancy is a common gynecological emergency in our hospital with frequency of 0.66% of all deliveries. This is lower than the other studies in Saudi Arabia [10], Pakistan [11] India [12] and Nigeria [13]. The mean age was found to be 29 ± 5.32 years which is consistent with the other studies [10,14]. The highest risk 45(60%) of ectopic pregnancy was found in those with previous pregnancies which was comparable with some studies [12,15] but is conflicting with other publications where it was more common in primigravida [10,11,16]. The risk factors were not found in 40(53.3%) patients this is comparable with other study [11]. The mechanism is anatomical or functional tubal pathology. The common risk factors noted were previous abdominopelvic surgery like cesarean sections, laparotomy, laparoscopy (22.7%), Previous ectopic pregnancy (9.3%), treatment for infertility (9.3%), and use of iucd (5.3%). Copper containing IUCD was present in all these women with IUCD. About 48% of patients with ectopic pregnancy had no risk factors which was similar to the findings by other researchers [18,19]. The majority of patients presented with amenorrhea, abdominal pain followed by vaginal bleeding which was consistent with the findings of other publications [13,18,20]. Abdominal tenderness was the most common sign noted in this study which is comparable with other researchers [13]. High index of suspicion for an ectopic in pregnant women is needed as diagnosis can be challenging as some present with vague complaints and can be asymptomatic. Diagnosis of ectopic pregnancy in this study was done on clinical findings, serum β-hCG levels and ultrasound. Ultrasonography either by transabdominal approach or transvaginal approach is the diagnostic imaging study of choice for ectopic pregnancy. Early recognition and timely management are particularly crucial, as in a small, unruptured ectopic pregnancy women are offered more treatment options which allows them to avoid surgery where preferred and improved outcome. The most of 72(96%) of the patients had tubal ectopic which was comparable with other studies in the literature [11,12,16]. The most 44(56%) of the tubal pregnancies were found on the right side which is similar to findings in other publications [11,12]. One patient had cesarean scar ectopic. Although the exact mechanism of scar implantation is not well understood, the most probable mechanism is that there is invasion of the myometrium between the endometrial canal and caesarean scar through a small tract. Despite the improvements in diagnosis and treatment, ruptured ectopic pregnancy continues to have significant morbidity and mortality due to intraperitoneal hemorrhage. About 54.6% (41/75) of patients presented with ruptured ectopic pregnancy. The main reason was delayed presentation. This was also observed in other studies [12,13,15]. The type of treatment of ectopic pregnancy depends on clinical condition and desire for future fertility. Laparoscopic surgery or medical treatment with intramuscular methotrexate are safe. The decision for surgical management or medical management of ectopic pregnancy should be customized based on the initial clinical parameters and patient preference after discussion of the pros and cons of each option. This is consistent with other studies [8,12]. In appropriately selected patients, the overall success rate for women treated with methotrexate for an ectopic pregnancy varies with a range of 70%–90% [21]. Our study shows that out of 13(17.3%) patients who received injection methotrexate 10(76.92%) was successful. Three (23%) patients who received methotrexate as initial treatment failed and required surgical management which is comparatively higher than previously reported [22]. Further investigation is needed to understand the reason and underlying contributing factors for methotrexate failure. Surgical treatment was the mainstay of management in majority 65(86.6%) of cases including three patients with failed medical treatment that proceeded to surgical management. This is in accord with some studies in which findings are near to our findings [14,17]. Of the 65 patients treated surgically, 38(58%) underwent laparotomy procedures, while 36(48%) were stable and expertise was available, so they underwent laparoscopy, this is comparable with other studies [11,12,19]. Salpingectomy was the most frequently performed procedure in this study which is similar to findings with other studies [13,14]. Salpingotomy which involves removal of the ectopic pregnancy via tubal incision while leaving the fallopian tube in situ was done in two patients because the other tube was damaged, and she desired future fertility. Close follow-up with serial measurements of serum β-hCG, was done with conservative management via methotrexate or salpingostomy to ensure resolution. One patient had cesarean scar ectopic which was managed by surgical resection from the lower segment scar site via laparotomy followed by repair of the defect. This is similar with other study [23] one patient with cervical ectopic pregnancy was managed successfully by suction curettage. This is similar with the study by Jefferson et al. [24]. There was no mortality in this study which is comparable with other studies [9-13].

The frequency of ectopic pregnancy was 0.66% in this study. It is a serious complication of first trimester of pregnancy and should be suspected in women with risk factors. Early diagnosis and prompt intervention are needed for good outcome and offering conservative treatment options and preserving future fertility. More than two third of patients in this study were treated by surgical methods while 17% were treated medically with a success rate of 76%.

© 2021 Humaira Saeed Malik. This is an open access article distributed under the terms of the Creative Commons Attribution 4.0 International License (CC BY-4.0).