Background: This paper shows originality for the treatment of acute spinal cord injuries by the absorption of fibrinogen by the omentum. This paper also shows that the statement by Ramon y Cajal that the reason spinal cords don’t heal is that the scar that routinely occurs at the point of spinal cord injury must be removed in order for axons to progress into the distal spinal cord.

Conclusions: Removal of a spinal cord scar following an SCI can result in motor function in both animals and in a human, as demonstrated in this paper. In addition, it was learned that the spinal cord has the ability to regenerate.

Damage to the Spinal Cord (SC) is one of the most daunting injuries a human can endure. Although improvement has occurred in the post-injury care of Spinal-Cord-Injured (SCI) patients, surgical techniques to improve acute and chronic SCI patients have been slow in advancing the remedy for this problem. Prevention of spinal cord scarring in acute SCI patients and the total removal of a spinal cord scar in chronic SCI patients appear to be required if clinical improvement is to occur.

Acute Spinal Cord Injury: Laboratory studies in cats showed that simple placement of an intact vascularized omental pedicle on an acute SCI within eight hours of injury resulted in the complete absence of a spinal cord scar (Figure 1). 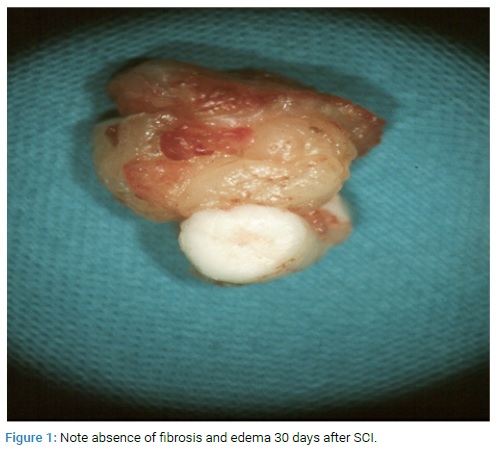 In contrast, when no omental pedicle was placed on an acutely injured SC, spinal cord scar routinely occurred [1,2] (Figure 2). Early omental placement on an acute spinal cord injury in animals clearly showed the prevention of a SC scar from developing. This was likely the result of the omentum’s ability to absorb the edema fluid that routinely occurs following an SCI. Edema fluid contains large amounts of fibrinogen, and it is this fibrinogen that is the initiating agent in the rapid development of a spinal cord scar following an SCI. The omentum’s absorption of fibrinogen in the edema fluid is likely the reason for the limitation of scarring [3–5]. If in the future the omentum could be routinely placed on an SCI in humans shortly after injury, a decrease in spinal cord scarring might occur. This clinical suggestion merits further study. 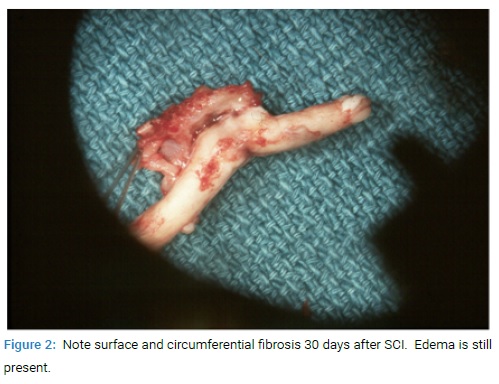 Chronic Spinal Cord Injury: Ramon y Cajal, the acknowledged father of neuroscience, stated that the SC scar that develops after injury prevents axons from progressing through the scar and down into the distal spinal cord. He was the first to recognize that the goal in the treatment of a chronic spinal cord-injured patient must be the total removal of a spinal cord scar [6]. Accomplishing this treatment described by Cajal is now possible. A series of experiments was begun years ago to develop a method to remove a piece of spinal cord (comparable to removing an SC scar) to allow for restoration of distal motor function [7–12]. A 5 mm segment of the spinal cord in cats was excised at the T–9 level. In order to join the severed stumps of the divided SC, a lumbar vertebrectomy was performed. Proximal and distal vertebrae adjacent to the excised vertebral body were solidly fixed by the insertion of stainless-steel plates and screws. The firm fusion of the proximal and distal SC stumps was accomplished using a CO2 laser set at 1–2 watts of energy. The laser beam was carefully directed under microscopic control to the cut edges of the proximal and distal SC stumps. The heat energy of the laser beam was known to penetrate only 1.2 mm into the spinal cord, thus avoiding injury to the deeply placed neuroanatomical tracts. After completing the CO2 fusion-welding process, a pedicled omental flap was wrapped around the transection site of the fused spinal cord in order to absorb axoplasmic fluid that had accumulated at the laser-treated site and also to increase omental vascularity to the cut edges of the divided SC. The final step in this surgical procedure was to immobilize the vertebral column by affixing two long stainless-steel plates on both sides of the dorsal spine processes with the plates extending above and below the SC transection site.

The experiment proved a limited success since several cats had return of Somatosensory-Evoked Potential (SEPs), but no cat had any return of motor function. The experiment was therefore discontinued since the procedure was difficult to perform (Figure 3) but, most important, it had no clinical significance. 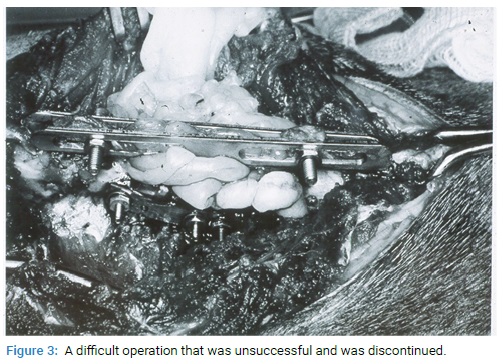 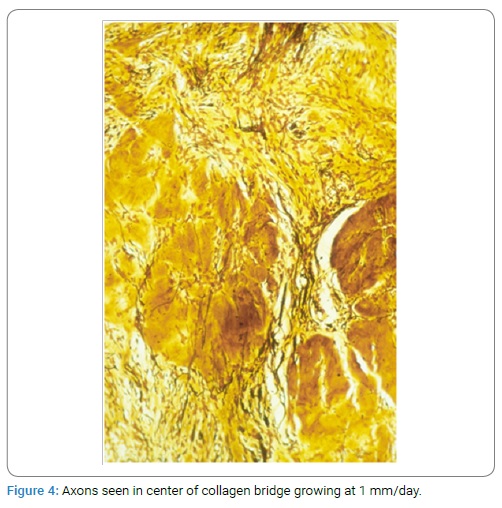 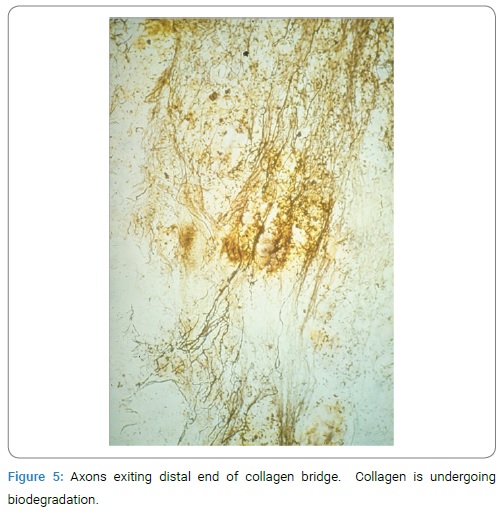 This vascularization of axons by the omentum was expected since it was known that placing the omentum on intact spinal cords resulted in a 58% increase in spinal cord blood flow and a 3–1 increase in blood vessel density [8,9]. This experimental operation resulted in seven of fifteen cats developing coordinated hind-forelimb walking ability (Figure 6). When the cats were autopsied, most of the collagen in the SC gap had disappeared, as the material is biodegradable, but the collagen bridge that remained was shorter in length than when it was originally inserted between the divided SC stumps at the time of surgery. This suggested that the spinal cord was in the process of longitudinal regeneration. This observation was later shown to have actually occurred by MRI studies in a patient later described in this paper. 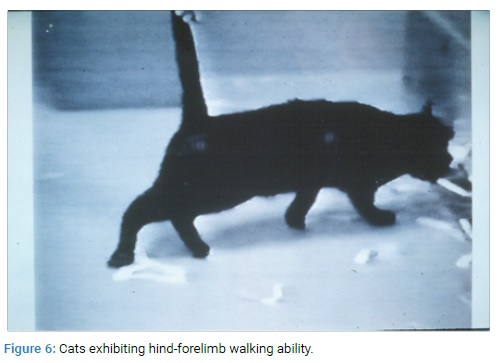 Operative Procedures: Laboratories around the world have tried over the years to restore motor function following an SCI. The SC scar that routinely follows an SCI is the basis for the problem. It seems reasonable to believe that if this problem could be solved by complete removal of an SC scar, clinical improvement in spinal cord injuries might result.

Freeman Operation: L. Walter Freeman in 1954 was the first to report the removal of an SC segment that resulted in the return of motor function in the lower extremities of animals [10,11]. His work was of historic importance but was little appreciated. He showed that it is possible to remove a segment of the spinal cord followed by subsequent motor function in animals. This finding has now been shown to be not only possible in animals [2–5] but also in a human. Freeman removed a segment of the spinal cord to create a gap between the cut edges of the SC. This gap in the SC is closed by removing a vertebrae that shortens the spinal column. Removing a spinal cord scar in the Freeman operation requires a vertebrectomy which shortens the spinal column so that both cut ends of the divided spinal cord can be joined. If the gap in the divided SC is extensive, two vertebrae may be required. Canavero [11,12] and his associates have shown that the cut ends of a spinal cord following the complete transection of the spinal cord, could lead to motor function and electrical conductivity in animals when the cut ends of the divided cord were fused by Polyethylene Glycol (PEG) [13,14].

The patient was a 24-year-old woman who had sustained a high-speed skiing accident on January 3, 1993. Magnetic Resonance Imaging (MRI) taken shortly after injury reported a “complete anatomical transection of her spinal cord at the T6–T7 level” (Figure 7). 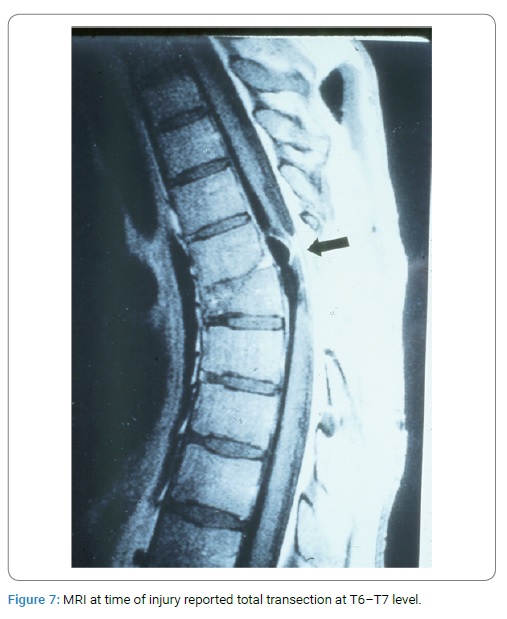 Over the next 3¼ years following her injury, she underwent no physiotherapy. However, in 1996, in the hope that she might regain an ability to walk, she underwent the omental-collagen operation. During this procedure, her spinal cord scar was totally removed, resulting in a large spinal cord gap that measured 1.6 inches (4 cm) between the proximal and distal spinal cord segments. Semi liquid collagen (5 cc) was inserted directly into the gap and an intact vascularized omental pedicle was placed on the collagen bridge. (Operative Photos in Addendum). The operation was uneventful as was her post-operative course. Eight months after surgery, the patient reported that in a swimming pool under direct command she could move her legs and ankles. The slight movement was confirmed by a video. At this time, the patient should have undergone extensive physiotherapy, but unfortunately this was not done. Five years after her surgery, she learned of the Neuro Institute in Arizona, which she entered in 2001 to begin intensive physical therapy. She spent one year in Arizona and showed great promise in functional areas as described by her physiotherapist in his letter (see addendum). She then returned to Germany for a year, but returned to the United States a year later. During this latter period in Arizona, she regained the ability to walk as filmed in the video.

The patient was progressing satisfactorily until she was informed that her visa to the United States was not to be extended and that she would have to leave the US. As reported by an unelected bureaucrat in Washington, the reason for this decision was that she came to the United States to recapture her ability to walk, and now that she was able to walk she would have to return to Germany. There was no consideration that she needed another year of physiotherapy in order to regain her ability to walk at a normal pace without a walker. Although great effort was made to reverse this decision, she was nevertheless forced to leave the country. On her return to Germany, she resumed her former employment, which required repeated movement in her office. Because of her slow walking ability, she could not perform her job duties and it became necessary for her to resolve the problem by returning to her wheelchair for faster mobility. It was tragic that authorities in Washington did not understand how important it was for this patient to remain in the United States for another year of physiotherapy.

MRI Studies: Following her injury in 1993, the patient had her first MRI which reported complete anatomical transection at the T6–T8 level (Figure 7). Following her surgery in 1996, she underwent further MRIs. Her first post-operative MRI, obtained one year after surgery, demonstrated a mass of soft tissue at the site of her SC injury (Figure 8). 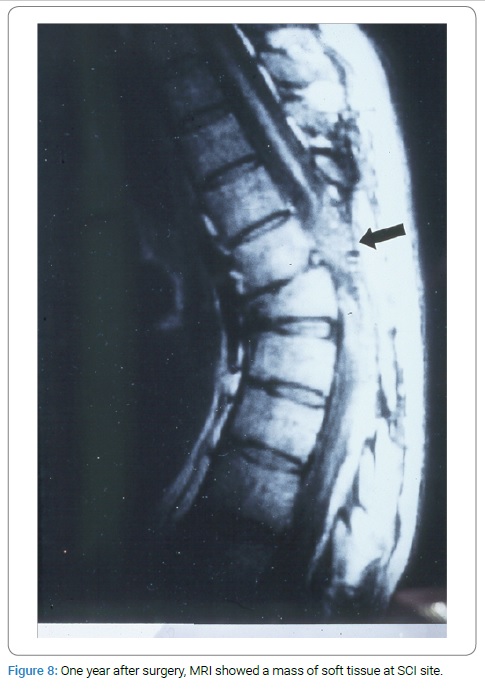 The exact location of her spinal cord injury was always known because of the absence of the vertebral disc at the T6–T7 level which had been extruded at the time of her injury. Three years after surgery, her MRI showed the previous soft-tissue mass in her spinal cord was forming into a longitudinal structure (Figure 9). 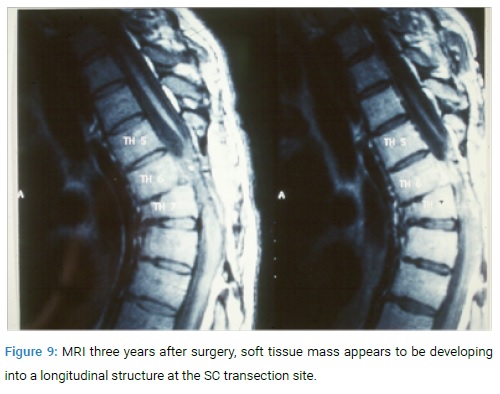 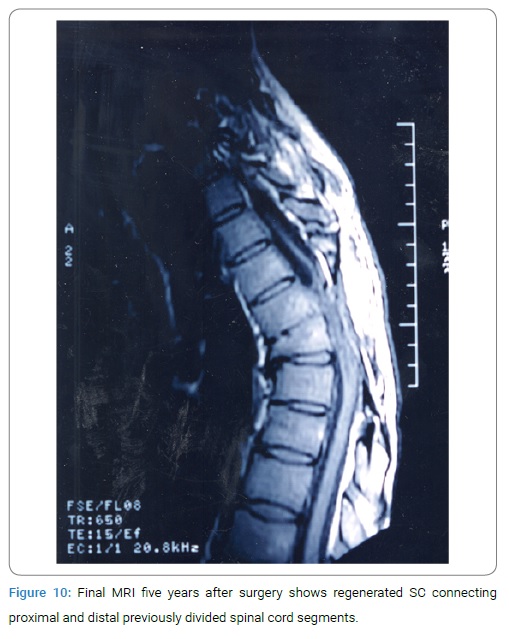 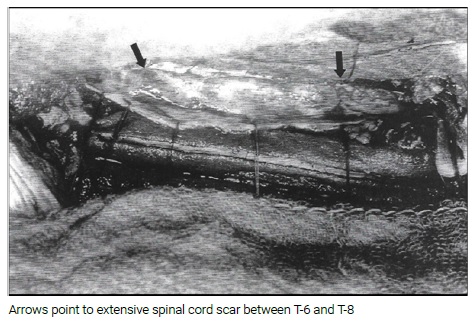 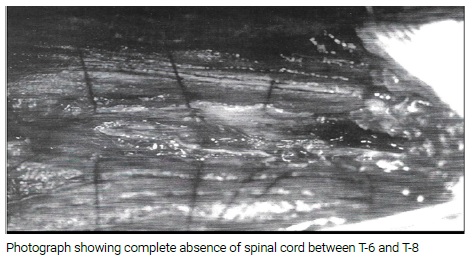 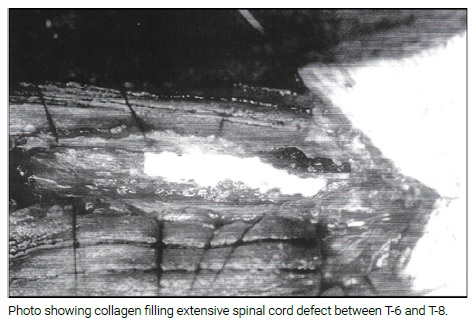 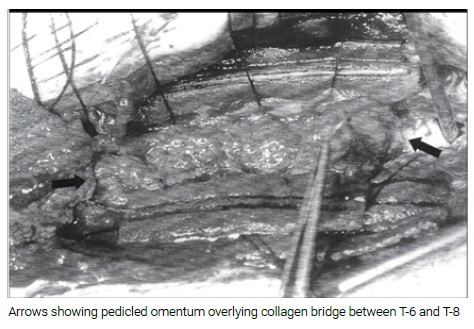 © 2020 Harry S Goldsmith. This is an open access article distributed under the terms of the Creative Commons Attribution 4.0 International License (CC BY-4.0).