Role of Prolotherapy in Amputation Stump

Non healing wound is a common problem encountered by plastic surgeon. There various causes due to which the wound becomes non healing and fails to heal. However there is no well-established method that can accelerate the wound healing rate. Prolotherapy is a method of injecting some irritant locally into the wound and is claimed to hasten the healing time. This article highlights the role of prolotherapy in management of amputation stump.

Adult wound healing comprises of three stages: the inflammatory phase, the proliferative phase, and the remodelling phase. These 3 stages have to occur in sequentially to result in healing of wound. Wound bed preparation is a new concept and can be summarized with the acronym T.I.M.E, T for tissue: non-viable or deficient. I for infection/inflammation, M for moisture balance. E for epidermis which was changed later to E for edge [1]. Large wounds often require a graft or a flap for wound coverage, which require the wound bed preparation. Prolotherapy is a procedure in which an irritant substance is injected into the wound and can initiate an inflammatory reaction that in turn promotes healing of wound [2]. Recently in literature, we came across use of prolotherapy for use in wound bed preparation.

This study was conducted in the department of Plastic Surgery at tertiary care center after getting the departmental ethical committee approval. Informed written consent was taken from the patient. The details of the patient in study are as follows: 37-year-old female with no known co-morbidities with h/o road traffic accident 4 months back and underwent right below knee amputation due to vascular injury and degloving injury of the left lower limb for which serial debridement was done in cardiothoracic and general surgery department. Now, the patient presented to plastic surgery department with extensive raw area over the left lower limb and non-healing ulcer over the right below knee amputation stump. The regular dressing and antibiotic changes could not lead to wound healing. Wound bed preparation was done using Dextrose 25% solution as agent for prolotherapy. It was spread evenly on to the wound followed by gauze dressing. Repeated session of prolotherapy was given every three days. After 4 session of prolotherapy wound bed. 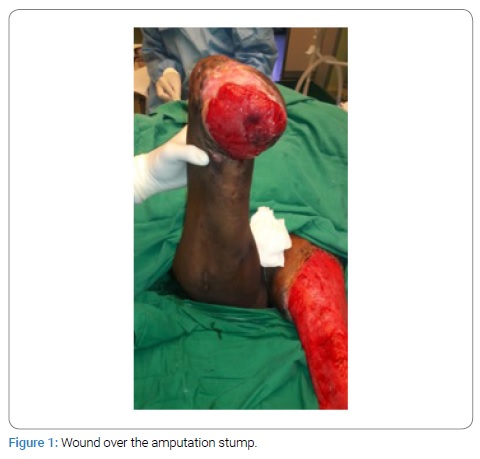 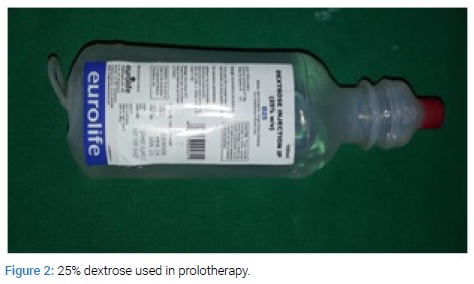 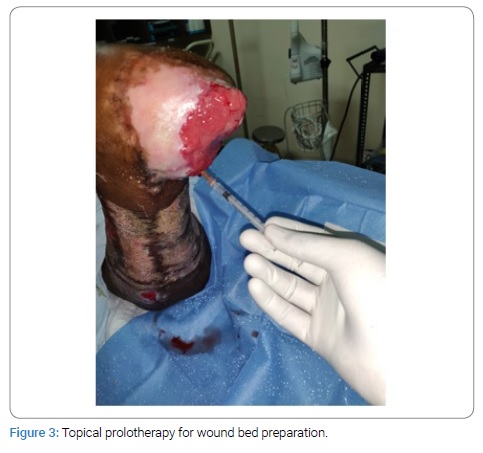 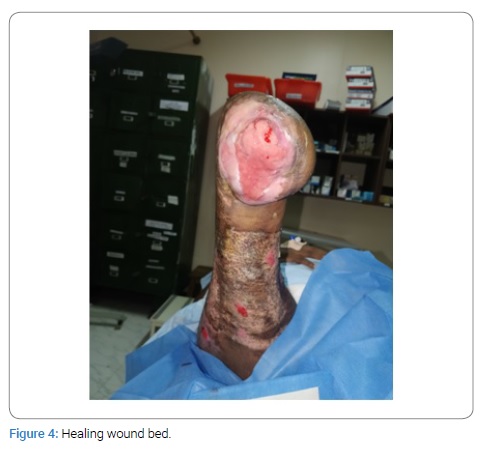 The term prolotherapy was given by Dr. George Hackett derived from the Latin word “proles” meaning offspring and the English word- therapy. It involves injecting an irritant substance into the ligament or tendon to improve the growth of new tissue. Multiple agents are used in prolotherapy, such as irritants (phenol), chemo-attractants (sodium morrhuate), and osmotic agents (dextrose). However the exact mechanism of prolotherapy is not clear, supporters of the technique believe that the application of hypertonic dextrose causes dehydration with osmotic rupture at the injection site that leads to local tissue injury that induces granulocyte and macrophage migration, with release of growth factors and collagen deposition [3]. In vitro studies have shown that 5% dextrose causes production of a number of growth factors required for tissue repair like PDGF, TGF-b, EGF, b-FGF, IGF-1, and CTGF [4]. In vitro studies have proven that cultivation of cells in culture medium with high glucose can improve the PDGF expression. PDGF has multiple reparative actions in wounds, including activation of angiogenesis, fibroblast proliferation, and extra-cellular production. TGF-beta expression is also increased by concentration of high glucose [5,6]. TGF-b is involved in different aspects of wound healing from inflammation to wound re-epithelialization. Other growth factors that are increased by high glucose levels include EGF, b-FGF, IGF and CTGF. Various studies on prolotherapy suggested that there are direct actions on collagen synthesis. A few studies have also demonstrated an up-regulation of matrix in response to prolotherapy or In vitro cultivation with increased concentrations of glucose [7]. Collagen type-I synthesis is also upregulated in high-glucose cultivation of renal fibroblasts, in a TGF-b-mediated pathway. Cartilage matrix protein agree can is upregulated and reported within chondrocytes cultured in high glucose, and also in patients who have received intra-articular injections of 12.5% dextrose [4–8]. There are no adverse effects of prolotherapy with 25% dextrose solution either local or systemic. Prolotherapy has been shown effective in treating many musculoskeletal conditions—such as tendinopathies, ligament sprains, back and neck pain, tennis/golfers elbow, ankle pain, joint laxity and instability, plantar fasciitis, shoulder, knee pain and other joint pain. Prolotherapy is useful in chronic wound and allows hastening the healing time. Prolotherapy provides analgesia to the patient although the mechanism is not known.

© 2020 Ravi Kumar Chittoria. This is an open access article distributed under the terms of the Creative Commons Attribution 4.0 International License (CC BY-4.0).