Role of Prolotherapy in Pressure Ulcer

Pressure ulcer or pressure sore is one of the complications seen in bedridden patients. Management of these ulcers is often challenging. But there is no well-established method that accelerates the wound healing rate. Prolotherapy is a technique that involves injecting some irritant locally in the wound that is claimed to hasten the healing. This article highlights the role of prolotherapy in wound bed preparation.

Pressure ulcer is commonly seen in critically-ill patients wounds often require graft or flap for wound coverage, but for this wound bed should be prepared first. Despite an increased number of therapies available for managing pressure ulcers, none has demonstrated any clear benefit over the others and pressure ulcer treatment remains difficult and time-consuming. Surgery may be required to cover the raw area but should be used as the last resort, as recurrence is often the rule. Also, pressure ulcer is often seen in critically-ill or chronically-ill patients who are usually unfit for reconstruction surgery. For these reasons, pressure ulcers are mostly managed by conservative treatment. Various local wound therapies have been advocated for use in this difficult to treat condition. Prolotherapy is one such modality that has been used in difficult wounds. Prolotherapy is a procedure in which an irritant is injected or sprayed into the wound that initiate an inflammatory reaction, thought to promote healing of wound [2]. The most common prolotherapy agent used in clinical practice is dextrose, with concentrations ranging from 12.5% to 25%. Dextrose is considered to be an ideal proliferant because it is water soluble, a normal constituent of blood chemistry, and can be injected safely into multiple areas and in large quantity. Hypertonic dextrose solutions act by dehydrating cells at the injection site, leading to local tissue trauma, which in turn attracts granulocytes and macrophages and promotes healing. In this article we share our experience of using prolotherapy in the pressure ulcer management.

This is a case report of the use of prolotherapy in a case of pressure ulcers. This study was conducted in a tertiary care hospital in 2019. The patient was 30 years male with post-spinal cord injury pressure ulcers on the bilateral ischial region for 3 months. The patient was thoroughly investigated. Wound tissue culture was sent and appropriate antibiotic therapy was given. Regular cleaning and dressing was done, but the wound was not showing any good sign of healing. To hasten the wound bed preparation decision was made to give a trial of prolotherapy. In our case, we have used Dextrose 25% solution as an agent for prolotherapy. It was spread evenly on to the wound followed by gauze dressing. A repeated session of prolotherapy was given every three days. After 3 weeks of prolotherapy wound bed was prepared, wound was covered with granulation tissue, and size of the wound also decreased.

After six sessions of prolotherapy over three weeks period, the wound bed was prepared and reconstruction was planned. No adverse local or systemic effect was noted with the use of prolotherapy.

Pressure sore or ulcer occurs at the area of prolong contact. Its site depends on position of the patient. The most common sites are-sacral region, heel, and occiput in the supine position, whereas the ischial region is the most common site in sitting position. Proper nursing care is required for its prevention. Once the pressure ulcer is developed, it is often hard to treat it. Often multidisciplinary team approach is required [1–3]. Various dressing methods have been advocated for pressure ulcer management, the prolotherapy is one such method. The term prolotherapy was coined by Dr. George Hackett in 1956. This word is derived from the Latin word proles meaning offspring or progeny and the English word “therapy". It involves injecting or applying an irritant substance (such as dextrose) to promote the growth of new tissue. Multiple agents are used in prolotherapy, some classified as irritants (such as phenol), some as chemoattractants (commonly sodium morrhuate), and others as osmotic agents (commonly dextrose). Although the exact mechanism of prolotherapy is not clear, proponents of the technique believe that the injection of hypertonic dextrose causes cell dehydration and osmotic rupture at the injection site that leads to local tissue injury that subsequently induces granulocyte and macrophage migration to the site, with release of the growth factors and collagen deposition. In vitro studies have shown that even concentrations as low as 5% dextrose have resulted in the production of several growth factors critical for tissue repair. Some of these growth factors include PDGF, TGF-β, EGF, b-FGF, IGF-1, and CTGF [4]. In Vitro studies have shown that the cultivation of cells in high-glucose culture medium can increase PDGF expression. PDGF has multiple pro-reparative effects in skin wounds, including the promotion of angiogenesis, fibroblast proliferation, extracellular production (Figure 1–4). 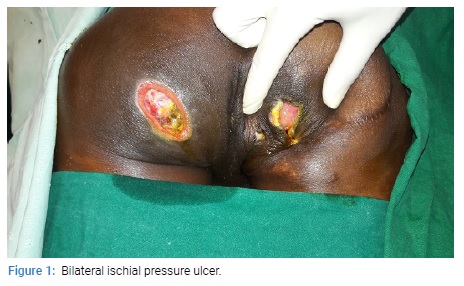 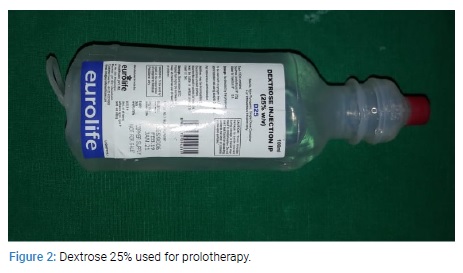 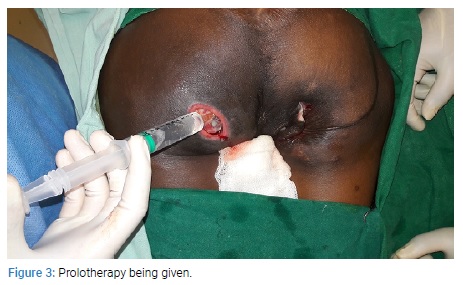 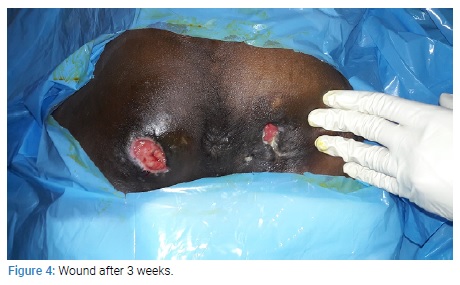 TGF-β expression is also upregulated by high-glucose [5,6]. TGF-β is involved in all steps of wound healing including inflammation, angiogenesis, fibroblast proliferation, collagen synthesis, matrix deposition, and remodeling, and wound reepithelialization. Other growth factors upregulated by high glucose include EGF, b-FGF, IGF, and CTGF, all having multiple preparative functions and improves healing in some animal wound models of impaired healing.

Some studies on prolotherapy suggest that there are direct effects on collagen synthesis [7]. There is up-regulation of matrix in response to dextrose prolotherapy. Collagen expression is increased after exposure of patellar tendon fibroblasts to the prolotherapy agents dextrose and thus may contribute to tissue regeneration within a cutaneous wound. Collagen type-I synthesis is also increased in high-glucose cultivation of renal fibroblasts, in a TGF-β-mediated pathway. Changes in the cartilage matrix protein aggrecan is reported in chondrocytes cultured in high-glucose, and in patients who have received intraarticular injections of 12.5% dextrose [4–8]. In our case we have used dextrose 25% as prolotherapy agent. We have used it as adjunct to other modalities. We have not noticed any adverse effect.

In this study, we found that prolotherapy has a role in the healing of the pressure ulcer and can be used as an adjuvant therapy for pressure ulcers. But since it is a single case study, a definite conclusion cannot be made. Large randomized control trials are required to confirm the efficacy of prolotherapy in pressure ulcer.

© 2020 Ravi Kumar Chittoria. This is an open access article distributed under the terms of the Creative Commons Attribution 4.0 International License (CC BY-4.0).