Background: Prognostic scoring systems such as TNM [1] and NPI (Nottingham prognostic index) [2] use maximal tumour diameter for staging. Breast cancer is three-dimensional therefore tumour volume and weight could be more accurate biological predictors. Nodal spread may also be different for tumors occupying a greater or lesser proportion of the breast. This study aims to measure breast cancer weights as a proportion of the mastectomy specimen weight and to compare node positivity rates in high and low proportion specimens.

Methods: Size, grade, node positivity, lymphovascular invasion, receptors, quadrant and tumour type were recorded for 382 mastectomy specimens. The weights of carcinomas were estimated as a proportion of the entire mastectomy weight. Tumour volume and weight was estimated using the ellipsoid model (V=(abc)π/6). The cohort was then divided at the medians into “low” and “high” tumour proportionality and “large” and “small” tumours.  Tumour weight and grade were then standardised for node positivity analysis.

Conclusion: These data suggest that surgeons should calculate the three-dimensional proportion of the breast that is occupied by cancer, particularly when the patient is on the cusp of sentinel node biopsy versus axillary dissection.

Breast cancer is the most common cancer among New Zealand women and follows lung cancer as the leading cause of cancer death of New Zealand females [3]. The overall age-standardised mortality rate is higher in New Zealand Maori compared to non-Maori women [4].

Tumour spreads to lymph nodes via lymphatics, and since lymphatics and lymph nodes are known to have biological activity against carcinoma [8], it is possible that a larger breast may protect from axillary node spread. Therefore, since the mean breast volume varies between ethnicities [9], there may be ethnic differences in the probability of axillary node metastases. To date, there has been a paucity of research published on the effect of breast cancer volume to breast volume ratio on axillary node metastases [10,11], and none looking specifically at outcomes in the Maori population of New Zealand.

Study population: Records from 500 consecutive patients who had mastectomies between 2013 to 2017 were reviewed. Inclusions were women who had mastectomies for invasive breast carcinoma. Exclusions included women who had undergone previous breast surgery or had undergone neoadjuvant chemotherapy. Women that had Paget’s disease or had missing tumour dimensions or breast volume were also excluded.

Data collection and Statistical analyses: Variables included in the MSKCC nomogram for sentinel node metastases such as age at diagnosis, tumour dimensions, cancer type, quadrant, lymphovascular invasion, grade, multifocality, receptor status, as well as ethnicity, smoking and node positivity were documented from clinical electronic records. Node positivity included micrometastases, macrometastases as well as isolated tumour cells to capture any evidence of tumour activity. In cases of satellite lesions in the breast, the volume of the largest lesion with invasive carcinoma was used. Volume of breast was derived by weight, with the assumption that one kilogram of breast tissue equated to one litre. Volume of cancer was approximated using the ellipsoid formula (V=(abc)π/6), where a, b and c represent the height, width and depth of the tumour. The ellipsoid formula has previously been used for estimating tumour volume and has been validated using a water displacement method [10]. The proportion of carcinoma volume to breast volume was then calculated for the 382 patients. The cohort was then divided at the medians into “low” and “high” tumour proportionality and “large” and “small” tumours (Figure 1). Logistical regression was used to determine association with node positivity and multivariate analysis was used to standardise for other variables. 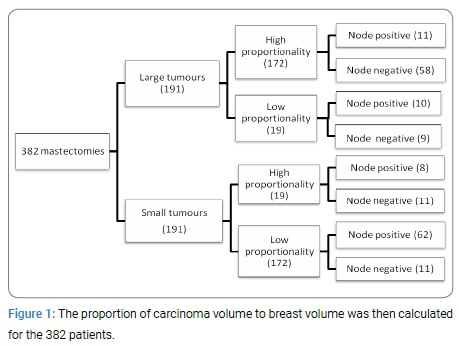 Multivariate analysis was then conducted, with adjustments made for age, grade, ethnicity, subtype, receptors and multifocality. A graphical investigation of the distribution of the tumour to breast volume ratio and the tumour volume led them to be transformed logarithmically and for ease of interpretation, the base 2 logarithm was selected. Doubling of tumour volume was associated with node positivity (OR 1.33, 95% CI 1.21–1.47, p-value = 6e-09) (Figure 2). 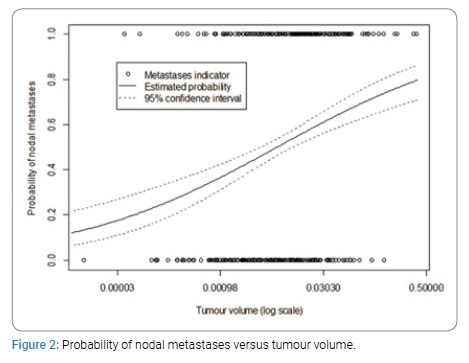 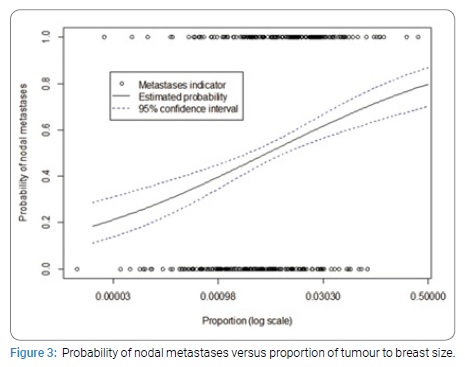 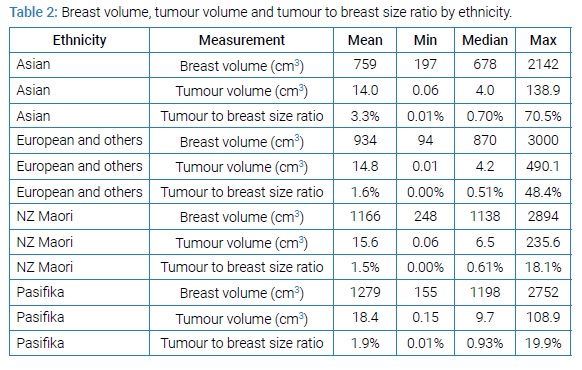 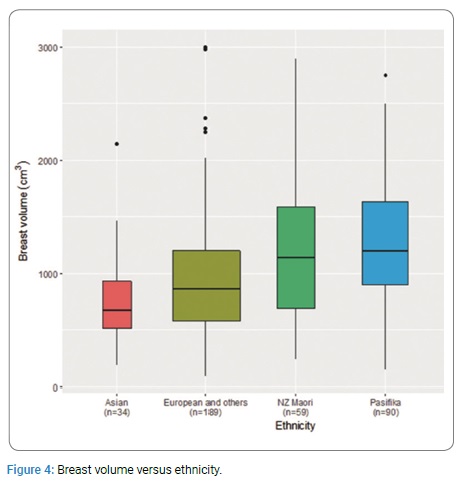 Multivariate analysis revealed that ratio of tumour to breast volume in NZ Maori compared to European was associated with higher rates of node positivity but this relationship with not significant (OR 1.91, 95% CI 1.01–3.63, p-value = 0.94).

To date there have been very few studies looking at the proportion of breast cancer to breast volume and its relation to axillary lymph node metastases. Wen J, et al. study [10] provided strong evidence to suggest that tumour-to-breast volume ratio is an independent prognostic factor of cancer-specific survival and positively associated with the status of axillary lymph node metastases. The calculations were slightly different in that the cohort was categorized into low and high tumour-to-breast volume ratios based on an optimal cutoff determined to be at 1.70%, in contrast to our study where the division was at the median proportion. Martić, et al. [11] was the first group to analyse tumour to breast volume ratio, proving it to be an independent predictive factor for axillary lymph node metastases in T1c ductal invasive breast cancer. Their methodology was markedly different from the present study as well as that of Wen J, et al. study [10]. In the first instance, the study was narrowed to include only T1c ductal invasive breast cancer. Breast volume was measured preoperatively using a device measuring according to a device based on Archimedes’ principle.

Although there is well-established relationship between tumour size and lymph node status in breast cancer [13], the main measurement used for tumour size has been tumour diameter. To our knowledge, our observation that tumour volume is strongly associated with axillary node positivity has only previously been studied by Wen J, et al. [10] who support this finding. Since volume of tumour is a more direct indicator of tumour burden, it may be more helpful to surgeons to think about tumour size in these terms rather than diameter, when considering the impact of size on axillary metastases.

Identifying predictors of axillary node metastases is important in order to reduce the false negative rate of sentinel node biopsies and axillary node dissections, as well as reduce the need for extensive surgery at the axilla. The have been a vast array of radiographical methods described in the literature [14–16] for preoperative measurement of breast and tumour volume. Calculating tumour to breast volume ratio preoperatively using some of these techniques, may provide surgeons with more information in deciding the most appropriate management of the axilla.

Prior studies have shown that the NZ Maori and Pacific Island population of New Zealand have larger and higher grade breast carcinoma with more involved lymph nodes [9]. This has been attributed to variation in biological characteristics. Our study reinforces the fact that NZ Maori have higher rates of axillary node positivity and larger tumours compared to NZ European. There are also clear ethnic differences in the proportion of breast cancer to breast volume illustrated in this study. This may have implications in terms of closer monitoring and more aggressive management of breast cancer in certain ethnic populations.

Our study was limited by the small number of participants, which affected our ability to achieve statistical significance. Menopausal status was not accounted for in our analysis, and therefore the effect of estrogen on breast and tumour volume was not considered. The hypothesis behind the study assumes that a larger breast equates to longer lymphatics however this has not yet been proven and wet lab studies on lymphatics need to be done to provide evidence for this.

The present study demonstrates the power of using breast cancer volume to predict metastatic spread to the axilla. It also adds to the current evidence for using the proportion of tumour to breast volume to predict axillary node metastases. These data suggest that surgeons should calculate the three-dimensional proportion of the breast that is occupied by cancer, particularly when the patient is on the cusp of sentinel node versus axillary dissection. Further investigation should be undertaken to explore reasons for Maori having a higher risk of nodal spread compared to non-Maori, in order to reduce disparities in breast cancer outcomes.

© 2020 Poole GH. This is an open access article distributed under the terms of the Creative Commons Attribution 4.0 International License (CC BY-4.0).