Comparison of Peritoneal Closure vs. Non-Closure after Non-Infected Elective Laparotomies with Midline Incision

Introduction: There is no consensus data regarding closure or non-closure of peritoneum in laparotomy and this topic remains a controversy among surgeons.

Material and method: In this prospective interventional study 124 patients undergoing laparotomy with midline incision have been assessed from March 2019 till September 2019 in Imam Hossein Medical Center. Sixty-two of these patients had peritoneal closure with continuous absorbable suture, while 62 other assigned to the non-closure group. Patients were evaluated for short-term complications: postoperative pain (Visual Analogue Scale), fever, infection, need for analgesics, and duration of hospitalization and long-term complications: Incisional hernia and adhesion. Statistical analysis was carried out with the help of SPSS software version 22.

Conclusion: Peritoneal closure in non-emergency, non-infected laparotomy is not able to reduce short term and long term complications. However, it might heighten the risk of infection, adhesion and postoperative pain in the patients.

In general, incision of any part of abdomen that could open abdominal cavity is called laparotomy [1,2]. The usual incisions used in abdomen explorations are vertical incision, transverse incision and oblique/transverse incision [3]. Vertical incision include midline and para median incision. Almost all abdominal and retroperitoneal surgical interventions can be performed by a midline incision. Generally, the term of laparotomy is referred to midline incision [4]. Peritoneum is the innermost layer of abdominal wall, which once opened the abdominal cavity becomes available. After abdominal surgery, some of surgeons suture this layer and believe that this action might strengthen the wound and abdominal wall, but on the other hand some surgeons close the abdominal cavity without suturing this layer and believe that closure of this layer might increase the time and cost of surgery and even postoperative pain for the patient [5-7]. Peritoneal suture is carried out via absorbable or delayed absorbable sutures. There is controversy over the technique of choice (continuous or interrupted) to close this layer, even between surgeons believe in closure of this layer. Overall, there is still disagreement on the closure of this layer [8,9]. One of the reasons some surgeons prefer to suture this layer is to maintain the anatomical structure of abdominal wall and also to reduce risk of infection, wound rupture and Incisional hernia, hemorrhage and adhesion [10]. On the other hand, the reason other surgeons wont suture this layer is its rapid healing in 48 to 72 hours without any suture and reduction in surgery time, need for analgesic, wound infection and length of hospitalization [11]. Therefore, the disagreement over closure or non-closure of peritoneum still remains on, even over the technique in which it should be performed. Based on the previous studies, there seems to be an agreement on peritoneal closure in obstetric surgeries such as hysterectomy and caesarian sections, but the disagreement seems to continue in other fields of surgery [12,13]. Thus, regarding the existing disagreements, the aim of this clinical trial was to compare short term and long term benefit of peritoneal closure with non-closure in an academic medical center.

This double blinded prospective clinical trial was conducted in Imam Hossein Medical Center (an academic center under supervision of Shahid Beheshti University of Medical Sciences) since March 2018 till September 2018. Informed consent was obtained from all participants before entering the study. The approval of Shahid Beheshti University ethic committee was also obtained (IR.SBMU.MSP.REC 1397. 430) and the RCT code was IRCT 43881. During this period 200 patients were assessed to enter the study, from which 124 met the inclusion criteria. The inclusion criteria were as follows: Laparotomy with midline incision, age of equal or greater than 16. The exclusion criteria were: prior history of laparotomy, diabetes mellitus, known connective tissue disorders, infection, obstetrics surgery, and emergency cases.

Randomization: Patients were randomized to one of the study groups (closure or non-closure) using a random number table.

Blinding: The surgeon and patient were unaware of the group the patient was enrolled in. All patients were assessed by a resident unaware of the allotted group of the patient in regard of pain intensity, need of analgesic and wound complications, postoperatively. Pain intensity assessment was performed via Visual Analogue Scale (VAS). To assess adhesion and Incisional hernia physical examination and abdominal sonography was performed 6 month after the surgery. All peritoneal closures were carried out using absorbable continuous sutures. Abdominal fascia was closed using 1-0 nylon continuous suture. The skin was closed using 2-0 or 3-0 nylon interrupted suture.

Sample size: Based on the findings of the study conducted by Sharami to find the least significant difference of 9 units between two study groups undergoing laparotomy with the power of 90% and first type error of 5% the number of required participants in each group were 56 cases. At last, with estimation of 10% dropout we allotted 62 participants to each group.

In this clinical trial 124 patients met the inclusion criteria and enrolled to the study. Among 124 patients assessed, 48 (38.7%) were female and 76 (76.3%) were male. Mean age of the participants was 30.4 year ranging from 10 to 52 years. There was no significant difference between the two groups in regard of age and sex (Table 1). 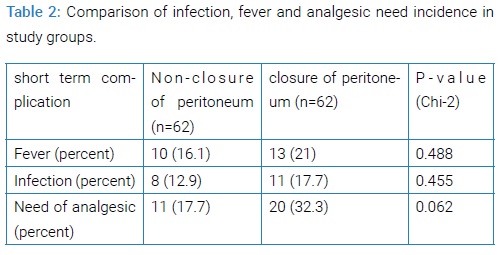 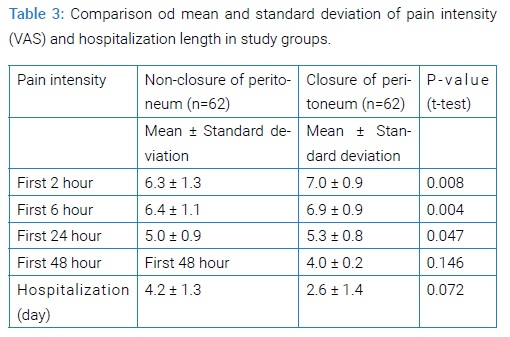 The result of this study showed that in comparison to closure group, patients with non-closure of peritoneum had lower incident of fever, infection and need of analgesics after the surgery. The need for analgesics in this group was almost twice lower than closure group, which was almost significant (P=0.062). Mean pain intensity in the first postoperative 48 hours was significantly lower in the non-closure group. In regard of long term complications in patients which have remained in the study, rate of adhesion was significantly lower in the non-closure group compared to closure group (10.7 vs. 16.7%). On the other hand, Incisional hernia was significantly lower in the closure group (12.5 vs. 9.3%). Midline incision is one of the most common incisions in abdominal surgery. Midline incision’s superiority is in debt to its better access to abdominal content, simple dissection of abdominal layers, better view and lesser pain after the surgery in comparison to other techniques, such as Para median incision [14]. There are several choices available for a surgeon to close the abdominal wall [15]. Different techniques and different types of sutures are available. The surgeon can close the abdominal wall in accordance to its anatomical structure and in the order that it had been sliced or he can suture some of the layers together or not at all (such as peritoneum) [16]. One of the possible reasons to close peritoneum is to retain the anatomical structure of abdominal wall with approximation of cut edges, which might result in faster healing, lesser infection and adhesion [17]. In contrast, some of the possible reasons not to close the peritoneum are its rapid healing without approximation of edges, reduction of surgery duration, analgesic usage, and infection risk and hospitalization length. The second alternative a surgeon has in how to close peritoneum is the suture technique, which can be interrupted or continuous. Finally the surgeon must choose the suture type, which can be absorbable (which might absorb in less than 30 days or more than 30 days (slowly absorbable suture)) or non-absorbable. Also, the surgeon can choose either monofilament suture or multifilament suture [18]. There are disagreements on the type of suture and technique of suture with which short term and long term complications could be reduced. Most surgeons perform peritoneum closure in laparotomy, based on their trainings and the available suture types. If, result of studies suggest that without closure of peritoneum no important complication might affect the patient, this method might reduce costs and duration of surgery. It seems that the number of RCTs conducted on peritoneum closure or non-closure laparotomy in abdominal surgery is not satisfactory. Also, most of these studies were on obstetric surgeries such as hysterectomy and caesarian, in which the overall tendency is toward peritoneum closure. Several factors might influence rate of complications after laparotomy surgery, some of them might be under surgeon’s control and some might not be. Among the factors which can be controlled by the surgeons are incision type, incision length (partly) and duration of surgery. Of the factors which are out of surgeon’s control, comorbidities can be named [19]. In the current study it has been shown that in cases the surgeon given up peritoneum closure, lesser pain observed postoperatively. Postoperative pain is a common complaint, especially after laparotomy. Some other studies, also, have shown that peritoneum non closure is associated with lesser pain after the surgery. In a study by Waheed Khan et al. [20], 60 patients undergone appendectomy from which 30 patients had peritoneum closure and 30 others operated with non-closure method. In this study pain intensity was assessed by VAS. Mean pain intensity and analgesic need was significantly lower in the non-closure group in days 0 and 1 after the surgery, which is consistent with our results. On the other hand, in another RCT by Hugh et al. [21] in 1990, patient’s undergone elective or emergency abdominal laparotomy was randomly allotted to peritoneum closure with catgut continuous suture and non-closure group. In this study there was no significant difference between the two groups regarding narcotic usage, pain intensity and complications. Lower pain intensity in non-closure group might be allocated to peritoneum rich innervations and poor blood supply. Suturing peritoneum cause tension which might disrupt its blood supply and causes ischemic pain. It also has been shown, in this study, infection rate in non-closure of peritoneum was lower. As a result of peritoneal suturing, due to tissue granulation and fat necrosis, more tissue damage will be caused, which in turn might increase risk of infection. Although their reported results are different, many studies have highlighted the advantage of non-closure peritoneum in decreasing infection rate [22]. Incisional hernia is one of the long term complications of laparotomy. Ventral hernia is a sign of defect in fascia and abdominal wall muscles in a way that abdominal or extra peritoneal contents might flip out. Determination of the cause of incisional hernias in a specific patient might be difficult, but obesity, primary defects in wound healing, multiple previous surgery, previous incisional hernia and technical faults during wound repair are some of the factors might have part in incisional hernia formation [23]. Incisional hernia’s incident has been reported from 2 to 20% [24]. Its incidence depends on patient’s condition, surgical technique and wound characteristics. Incisional hernia might disrupt patient’s comfort; causes pain, reduce his quality of life and impair his function. Supporters of peritoneum closure believe that closure of this layer will improve layer fibrosis, therefore, will decrease risk of incisional hernia. Currently, there is no evidence regarding an association between closure of peritoneum and incisional hernia reduction. It should be noted that this study faced limitations such as restriction to elective and non-infected patients, small sample size and absence of long term follow-up.

The results of the current study showed that peritoneum closure after non-emergency, non-infected laparotomy failed to reduce short term and long term complications, significantly. However, it might increase risk of infection, adhesion and pain. To confirm such results, further studies with larger sample size and longer follow-up duration is needed.

This study was in Compliance with ethical guidelines. Informed consent for the research was obtained from all the patients. This study was approved in the Ethics Committee of Shahid Beheshti University of Medical Sciences (IR.SBMU.MSP.REC.1397.430).

The authors took it upon themselves to express their humble thanks and gratitude for financial and spiritual supports of Shahid Beheshti University of Medical Sciences and also patients who helped us during this study.

© 2020 Arash M Tofigh. This is an open access article distributed under the terms of the Creative Commons Attribution 4.0 International License (CC BY-4.0).