Bouveret’s Syndrome – A Case Report and Review of Literature

Bouveret’s syndrome is a rare form of gallstone ileus caused by the passage and impaction of a large gallstone through a cholecystoduodenal fistula into the duodenum, resulting in gastric outlet obstruction. It is a rare form of gall stone ileus (1-3% of cases of gall stone ileus; gall stone ileus itself is extremely rare occurring in only 0.3-0.5% of patient with cholelithiasis) and causes significant morbidity and mortality1. It is common in elderly female patients with multiple comorbidities including a history of long standing cholelithiasis, presenting with features of small bowel or gastric outlet obstruction. A high index of suspicion is essential for prompt diagnosis and management. An upper gastrointestinal endoscopy, plain abdominal X-Ray and CT scan often helps in confirming the diagnosis and treatment modalities range from endoscopic retrieval, lithotripsy, laparoscopic procedures and when these fail, open surgery and retrieval of the obstructing stone. Here we present a 79 year old lady with multiple comorbidities along with a long standing history of cholelithiasis who developed Bouveret’s syndrome and discuss the pitfalls in diagnosis and management of this difficult and sometimes challenging condition.

A 79 year old lady was admitted with suspected haematemesis of one day duration. She was complaining of upper abdominal pain and was dehydrated. Initial blood tests showed normal haemoglobin. After fluid resuscitation, she had an upper gastrointestinal endoscopy. This revealed low grade oesophagitis and a hard object in the duodenal bulb causing gastric outlet obstruction (Figure 1). 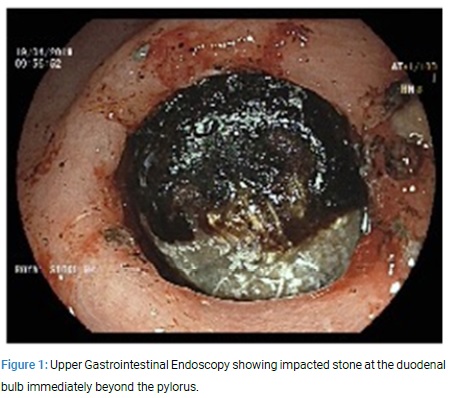 The scope could not be negotiated beyond and repeated attempts to snare it with a grasper was unsuccessful. An ultrasound examination revealed a trace of free fluid around the gall bladder with gallstones. The common bile duct was dilated to 8 mm with prominence of intra hepatic ducts in the right lobe of the liver. A CT scan revealed a 3.9 x 5.8 cm gall stone in the region of the gastric pylorus causing gastric outlet obstruction (Figure 2). 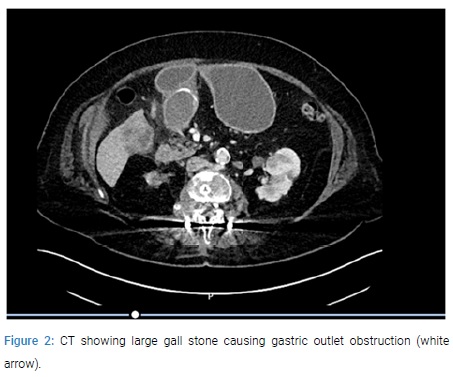 On review of her medical history, it was noted that she has been known to have gall stone disease since the last 16 years. When first diagnosed, the gallstone was 4 cm in size. In view of her comorbidities including ischemic heart disease, hypertension, Non Hodgkins lymphoma of the right kidney with infiltration to lumbar spine and psoas with pathological fractures requiring spinal fixation and chemotherapy, it was decided that conservative management is appropriate as the patient was also reluctant for surgery. Prior to this presentation, she was admitted 6 years ago with an episode of acute cholecystitis and a CT scan had shown a large obstructing calculus in the neck of the gall bladder. She was treated conservatively with antibiotics. The patient underwent laparotomy and at laparotomy, a gastrotomy was done and the stone was milked proximally from the impacted site at the duodenal bulb to the stomach and retrieved (Figure 3 and 4). 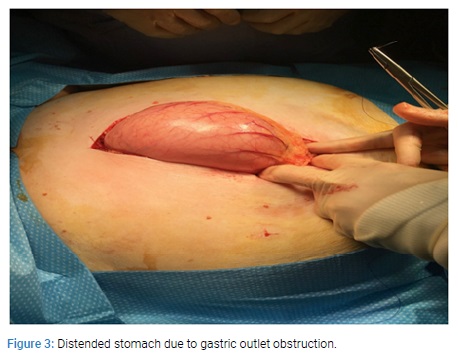 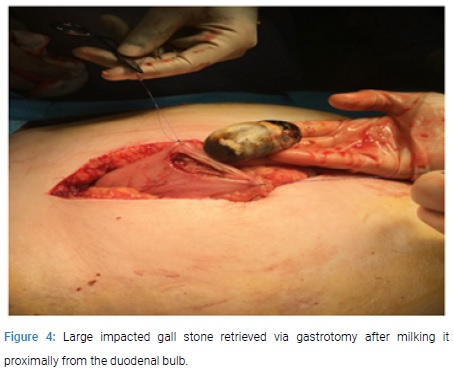 In view of her poor general condition, it was decided to leave the cholecystoduodenal fistula alone and she made a good recovery and was discharged after 10 days.

Bouveret’s syndrome is a rare but potentially life threatening condition which affects <0.5% of patients with gall stones. A high index of suspicion due to non specific symptoms and investigations including CT and endoscopy is necessary to promptly diagnose and initiate management in this elderly sub group of patients with multiple comorbidities. Treatment modalities include endoscopy with adjuvants such as lithotripsy failing which surgery including a laparoscopic approach is effective. Simultaneous or subsequent cholecystectomy with repair of the fistula is usually not warranted in a majority of the cases.

© 2020 Vittal Rao. This is an open access article distributed under the terms of the Creative Commons Attribution 4.0 International License (CC BY-4.0).