Patient and methods: A retrospective analysis of 834 LC over a period of 4 years in a single surgical unit in a tertiary care medical college was performed and various factors affecting conversion and complications reviewed.

Conclusions: LC remains a safe procedure when performed with attention to anatomical landmarks and with a low threshold for conversion to open procedure in difficult cases.

Since its introduction, LC has revolutionized the treatment of cholelithiasis with its inherent advantages of shorter duration of surgery, lesser pain, faster recovery, cosmesis as well as shorter hospital stay [1]. However, the loss of touch sensation of the tissues, three dimensional views and the need to develop good hand-eye co-ordination usually leads to a learning curve where the complication rates can be high unless mentored properly [2]. Lack of structured teaching programs in laparoscopic surgery at the postgraduate level in many hospitals coupled with the burden of gallbladder disease and the demand for laparoscopic cholecystectomy has led to a situation where more and more surgeons are being churned out with little, if any training in this procedure with dangerous consequences for society. In our surgical unit, the residents progress sequentially from getting oriented with the procedure, holding the camera and learning the key anatomical landmarks and techniques, being allowed to remove the gallbladder from the liver bed, and lastly, clipping and dividing the cystic artery and duct before being allowed to perform LC individually under the direct supervision of a scrubbed faculty member. The final step is when the resident operates alone, but not truly alone, since he/she is directly supervised by a faculty member who remains present (although not scrubbed) in the operation theatre, guiding the resident until the procedure is completed. The present series presents our experience with LC in a single surgical unit with 834 patients over the past 4 years.

The records of all patients who underwent LC in a single surgical unit of a tertiary care medical college over a period of four years (January 2015 – December 2018) were retrospectively reviewed the following data was recorded - age, sex, comorbidity, conversions to open cholecystectomy, reason for conversion, and any complications of the operation. All our LC are performed electively - patients who presented to the emergency with acute cholecystitis were initially managed conservatively since we do not perform LC during acute presentation; these patients were operated electively 6 to 8 weeks after resolution of the acute episode after routine work up (including ultrasound of the abdomen and liver functions) from OPD. In patients where the investigations were suspicious for Common Bile Duct (CBD) calculi, Magnetic Resonance Imaging (MRCP) was done followed by endoscopic retrograde cholangiography if indicated. Once cleared, patients were admitted one day prior to LC. LC was performed under general anaesthesia in all cases. A standard four port technique was used in all cases, with the first trocar being placed by open (umbilical pillar) technique followed by the secondary trocars under vision. Once the gallbladder was visualised, dissection was started at the gallbladder – cystic duct junction to define the anatomy of the Calot’s triangle and a critical view was obtained prior to clipping or dividing any structure. Drains were placed selectively based on the decision of the operating surgeon. After a few hours of post-operative observation, patients were shifted back to the ward and usually discharged on the next day.

A total of 834 patients underwent for LC in our surgical unit over a 4 year period –of these, 657 (78.77%) were females and 177 (21.22%) were males with average age of 51.8 years (Average age for males was 40.3 years and for females, 54.9 years). The overall conversion rate to open cholecystectomy was 4.31% (36 patients; conversion rate in females 3.95%; 5.64% in males, but not statistically significant). The most common cause of conversion to open cholecystectomy was a frozen Calot’s triangle where the anatomy could not be defined clearly (19 cases; 52.7%), followed by dense pericholecystic adhesions where the gallbladder could not be separated from surrounding tissues (10 cases; 27.77%), cholecysto-duodenal fistula (03 cases; 8.32%), cholecysto-colic fistula, intraoperative bile leak, CBD stones and CBD injury (01 case each). Although the conversion rate was higher in patients aged more 49.5 years, in those with comorbidities, previous episodes of acute cholecystitis, gallstone induced pancreatitis and previous abdominal surgery; there was no significant association of conversion with any of these factors.  The results are tabulated as (Table 1 and 2). 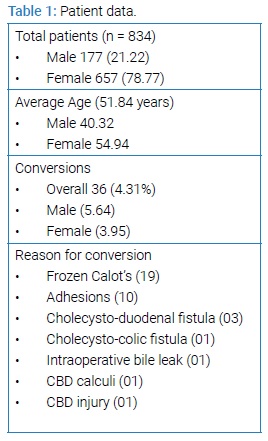 LC is firmly established as the gold standard for the treatment of cholelithiasis [1,2]. With increasing postgraduate seats in our country, a lack of formal teaching in laparoscopic surgery at the postgraduate level and few centres where adequate ‘hands on’ experience is being imparted to surgical trainees, a situation may soon arise that many fresh postgraduates are sent into the field without necessary skills to tackle one of the commonest operations they are called upon to perform. Not only this, the near total absence of open cholecystectomy being performed today adds to the problem since any LC converted is usually a difficult one or one where some complication has occurred, and inexperience in both (open as well as LC) translates into a rapidly evolving crisis of sorts that needs to be earnestly addressed by the surgical fraternity. Although many centres offer advanced laparoscopic surgery training after post-graduation there is still a lacuna of proper training in LC that needs to be filled at the post-graduate level so that it can translate into benefit for society with a low rate of complications. At present, our department has 4 surgical units, and despite wide and varied surgical interests of the faculty, LC remains, by far, the commonest procedure being performed. Over the past 4 years, in our surgical unit, we performed LC in 834 patients, with an overall conversion rate of 4.31%, which is pleasantly low given our penchant for allowing our postgraduates to operate as well as our tendency to convert without hesitation whenever difficulty is encountered during surgery. Quite possibly, our insistence on step-wise training, [2] looking for anatomical landmarks, constant vigilance and supervision, achieving critical view, and not dividing any structure without confirmation from on-table assistants has paid dividends in the form of a low conversion rate. In earlier published reports, we had a much higher conversion rate [3,4], but the present low conversion rate probably reflects an increase in the cumulative experience of a smaller group of surgeons as well as better visualization due to advancement in camera quality and high definition monitors.

The most common cause of conversion in the present series was a Calot’s triangle where the anatomy could not be defined and a critical view could not be obtained (frozen Calot’s - 19 cases; 52.7%), followed by dense pericholecystic adhesions where the gallbladder could not be separated from surrounding tissues (10 cases; 27.77%). Inability to correctly identify the anatomy within the Calot’s triangle has been reported as the commonest cause of conversion by other authors also [5,6]. However, many of these series have dealt with LC being performed in a setting of acute cholecystitis, [7,8] whereas our series is primarily one where LC was performed after 6 to 8 weeks of acute episode when it is presumed that acute inflammation, edema, adhesions, etc. associated with acute cholecystitis have settled down. However, surprisingly, even after deferring surgery for a few months after acute cholecystitis, dense pericholecystic adhesions were still the second most common cause of conversion in our series – possibly, this represents recurrent attacks or persisting subacute inflammation, and actually reveals the fallacy of our expectant approach. Unfortunately, our hospital set up precludes performance of LC in acute setting as we presently do not have laparoscopic facility in our emergency theatres. In an ideal world, pre-operative risk stratification of patients into those in whom LC would be successful and those in whom conversion would occur would help in deciding which patients to take up for LC or open cholecystectomy - although a few authors have attempted to do so [9], there are no clear indications for deciding the success or failure of LC pre-operatively - all the factors assessed till date (elderly age, male sex, gallbladder wall thickness, BMI, previous surgery, ERCP, WBC counts, etc.) still remain secondary to surgical experience and cannot be ethically justified as a reason not to offer a patient LC [9-12].

There was 01 case of bile duct injury (BDI) in the present series (0.12 %). This was an elderly gentleman with conservatively managed gallbladder perforation who was taken up for LC 8 weeks after removal of pigtail. There were separable adhesions with the gallbladder, but during dissection of the Calot’s, bile was noticed coming from above and the procedure was converted. He was found to have a lateral injury of the common hepatic duct, just near the hilum, and this was repaired over a t-tube placed in the right hepatic duct using 3-0 polydioxanone suture. He remained well in the post-operative period, but did not tolerate clamping of the t-tube (after 3 months) and subsequently underwent ERCP, stent placement and removal of the t-tube after which he is doing well. BDI after LC is now considered to be an inherent risk of the surgery, with a rate of about 0.08 - 0.19 % [13,14]. In the early days of LC, the incidence of BDI was higher, but with increasing experience the rates of BDI have now become comparable with that of open cholecystectomy [14]. BDI are a serious complication of LC, and usually occur because of an error of visual perception rather than technical skill [15]. A full discussion on the prevention and management of BDI in LC is out of the scope of this paper, but suffice to say, our insistence on proper traction on the gallbladder to open up the area of Calot’s triangle, recognizing anatomical landmarks (such as Rouviere’s sulcus, supra-cystic part of the common duct, hepatic artery pulsations, cystic lymph node), starting dissection towards the gallbladder – cystic duct junction, good posterior dissection (as high as possible), minimal use of cautery, not struggling with the tissues or using ‘brute force’ to open up tissue planes during dissection, and achieving critical view from both sides (and demonstrating it to the assistant!), sequential training of residents [2] and converting as well as calling for help without hesitation in case of any difficulty has translated into a low BDI rate (Table 2). As can be seen, LC remains a safe procedure with a low rate of conversion and BDI even in a teaching hospital where there are multiple hands-in-training provided the trainees are properly supervised and the basics of the operation adhered to.

© 2020 Robin Kaushik. This is an open access article distributed under the terms of the Creative Commons Attribution 4.0 International License (CC BY-4.0).