The traditional method of cortical mapping during neurosurgery follows Penfield’s procedure elicited using electrical stimulation at the cortical surface. However, this method can induce convulsions or result in mislocalization of function when electrical stimuli exceed the threshold. Volumetric stereotactic procedures have been developed to precisely localize intracranial lesions during surgery. However, brain shift caused by the surgical procedure can compromise accurate localization by this method. A noninvasive functional neuroimaging method with spatial and temporal resolution, therefore must be developed. In this study, we investigated the possibility of performing functional brain mapping and localizing a tumor using thermography.

We have used waking-state craniotomy for the epilepsy surgery and removal of lesions from eloquent cortical area in order to permit brain mapping. Prior to the operation, the surgeon explained the treatment options to the patient and obtained informed consent for the procedure. Craniotomy was performed using sedation with propofol and local anesthesia with bupivacaine and lidocaine [1–3]. After the craniotomy, administration of propofol was discontinued to restore full alertness. Then thermomapping was carried out by a thermovision camera with digital image processing (TVS 100ME, Nippon Avionics, Tokyo, Japan) during the patient’s voluntary movement of the limbs in response to instructions. The thermovision camera had a 100-ms scanning time, with each scan including the mean of 16 measurements. Thermal sensitivity was 0.01?. The digitized thermal image consisted of 120 X 160 pixels. The thermogram consisted of the thermal image and the structural image. The thermal image was superimposed on a structural image from a Charge-Coupled Device (CCD) camera. The thermovision camera was focused on the cortical surface using a zoom lens. Intraoperative electrical stimulation for cortical mapping also was performed 1, 2, 3. A  current generator (Nihon Koden, Tokyo, Japan) produced a train of biphasic square-wave pulses with a frequency of 60 Hz and a single-phase duration of 1.25 ms. This current was delivered via bipolar stimulation with the carbon tips spread 5 mm apart. The patient’s motor strip was stimulated with an initial current of 1 mA followed by increases of 1 mA until a motor response was identified. An Infrared-Based Neuronavigation System (INS) was used intraoperatively, to confirm the location of tumors. This localization was achieved using the Flash Point Model 5000 tracking device (Image Guided Technology, Boulder, CO) along with the Stealth Station (Stealth Technology, Boulder, CO) [3,4].

A figure shows typical changes in cortical temperature upon voluntary movement of the patient’s contralateral fingers. Timing of changes in cortical temperature corresponded strictly to the movement, with the temperature increasing during movement and decreasing immediately after interruption of movement (Figure a and b). Spatially, the temperature increased in the focal area in the motor cortex during the voluntary movement of the contralateral limbs (Figure c and d). Functional brain mapping obtained from thermography completely coincided with that obtained from the electrical cortical stimulation. Thermography also depicted a clear-cut focal thermal abnormality in the cerebral cortex located above the tumor (Figure a-c) [5,6]. This area was 0.7 to 2.2? cooler than the surrounding sensorimotor cortex (Figure d). This thermal focus in the dorsal cerebral cortex overlying the tumor coincided with localization of the tumor by INS (data not shown). As the thermogram included a superimposed image from the CCD camera, precise identification of anatomic structures such as sulci, veins and arteries was possible from the superimposed structural image, and so relationships to anatomic structures and tumor location were evident (Figure c and d). As a result, the tumor could be removed without sequelae. 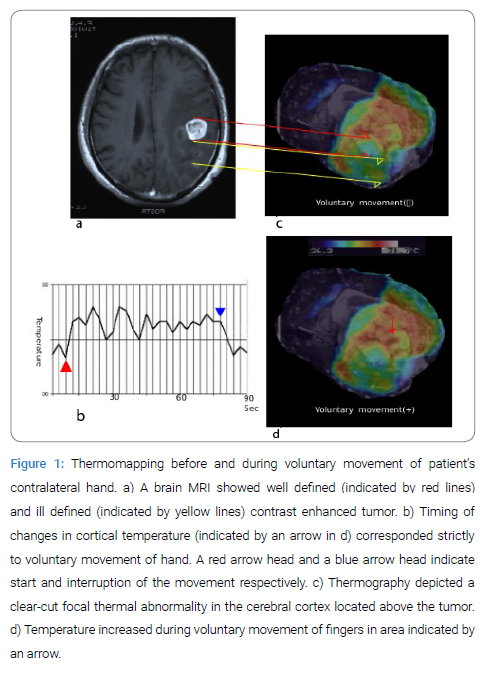 All heated bodies emit energy in the infrared (IR) band [6,7]. The atmosphere permits unhindered passage of electromagnetic waves of IR ranges of 3–5 and 8–14 µm. These emissions travel at the speed of light as photons or quanta of energy, permitting remote detection and measurement of temperature of objects according to intensity of IR radiation. Ueda et al. [8] reported that sensory area could be detected using thermography during electrical stimulation of the contra-lateral median nerve. In our studies, thermography detected the increase of cortical temperature during the movement of contra-lateral limbs. The area where movement-associated changes in temperature were observed represented the site of the metabolic response in the motor cortex (Figure c and d), because functional brain mapping obtained from electrical cortical stimulation completely coincided with the thermomapping. As thermography also projected a thermal focus on the cerebral cortex overlying tumors, we could localize subcortical tumors in real time from the thermal image. We have shown that functional brain mapping and localization of tumors can be performed by means of thermal imaging during neurosurgery. As such mapping is noninvasive and localizations are carried out in real time, thermography should provide good input for neurosurgical navigation systems.

6. Shevelev I A. Functional imaging of the brain by infrared radiation (Thermoencephaloscopy). Progress in Neurobiology. 1998;56(3):269–305.

© 2020 Fumihiro Imai. This is an open access article distributed under the terms of the Creative Commons Attribution 4.0 International License (CC BY-4.0).